As a PDF viewer and editor, Bluebeam Revu allows you to work with any and all PDFs, regardless of how data is encoded within them. Most often, the content within a PDF document will be encoded as one of two types of data: raster or vector. Although Bluebeam Revu can work with both raster and vector PDFs, there are some program features that can only be used with vector data, and others that can only be used with raster data.

In this article, we will overview the differences between raster and vector data, how to determine what type of data your PDF is using, and which Bluebeam Revu features are accessible for each data type.

PDFs can include with a wide variety of data, including text, images, and hyperlinks. PDF images will genreally be encoded as either raster data or vector data.

Raster data is generally created through scanned documents. When images are scanned, they are made into bitmap images composed of pixels. Raster documents don’t contain any actual lines or text – instead, they contain only a series of pixels that represent lines and text. With raster images, the computer won’t be able to tell the difference between images and text, as it will simply see them all as groups of pixels. Because of this, not all Bluebeam Revu features will work with raster data.

Vector data is created on the computer, through a CAD (Computer-Aided Design) program, such as AutoCAD or Adobe Illustrator. Vector images are created using vectors, which are paths defined by a start and end point. Vector PDFs contain more data than raster PDFs, and if possible, you should always try to use vector data. In terms of Bluebeam Revu, vector content will be easier to work with and can utilize more tools within the program.

Text data is another type of PDF content that doesn’t fall directly into the raster and vector categories, but abides by similar rules. PDFs can store text characters that a PDF reading program will understand. Text is generally added by a software application, such as Microsoft Word. Now, you may have text characters in scanned, raster documents – but this data isn’t considered PDF text, as it is composed of pixels instead. Most software applications will not be able to easily work with scanned, raster text characters unless additional processes are run on it, like Optical Character Recognition.

HOW TO TELL THE DIFFERENCE BETWEEN RASTER AND VECTOR DATA

You can tell if a PDF is encoded with raster or vector data by simply zooming in to the document. When you zoom into a raster PDF, the images and text will become blurry and pixelated. 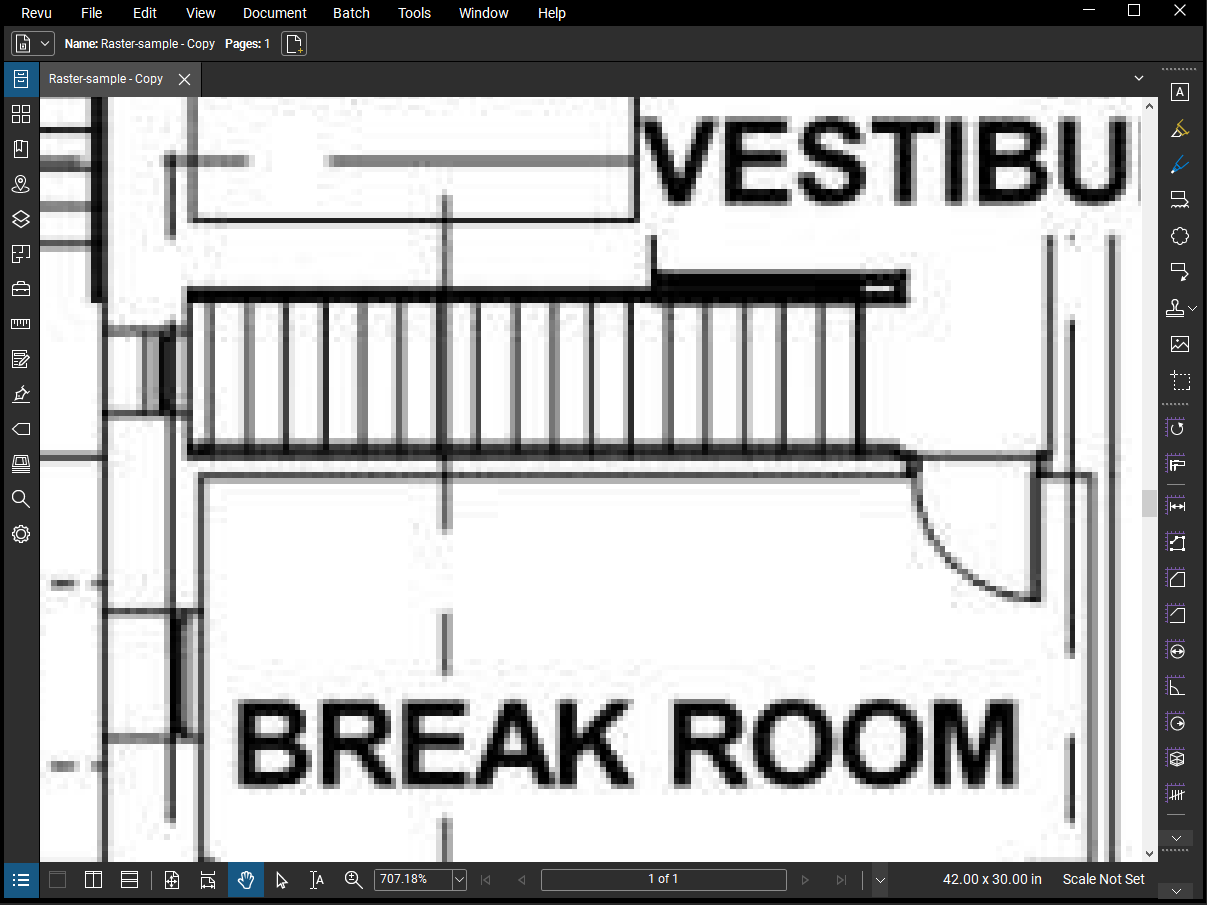 When you zoom into a vector PDF, the images and text will stay clear and sharp – no matter how far you zoom in. Here lies one of the benefits to using vector data – because the lines stay sharp, they allow users to take more precise measurements for estimation and takeoffs. 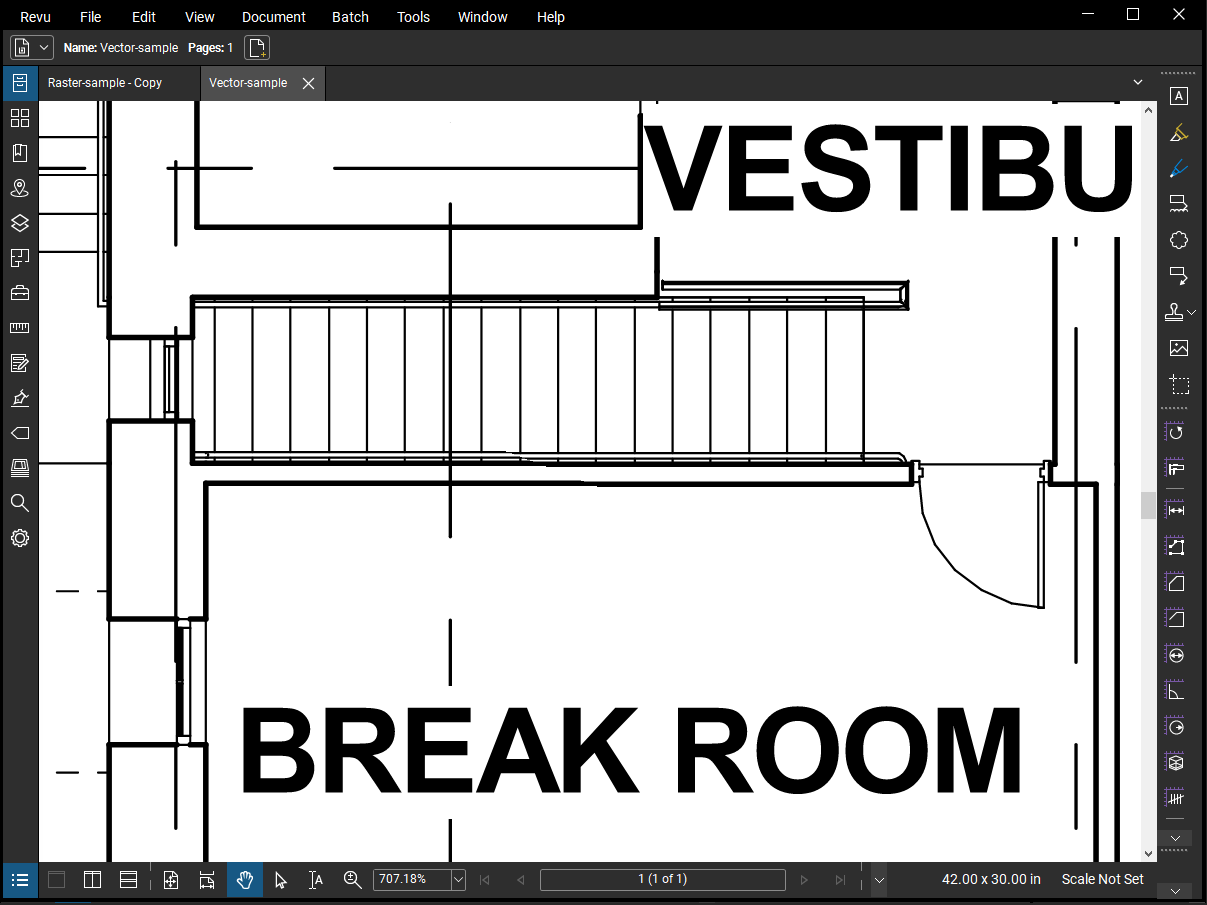 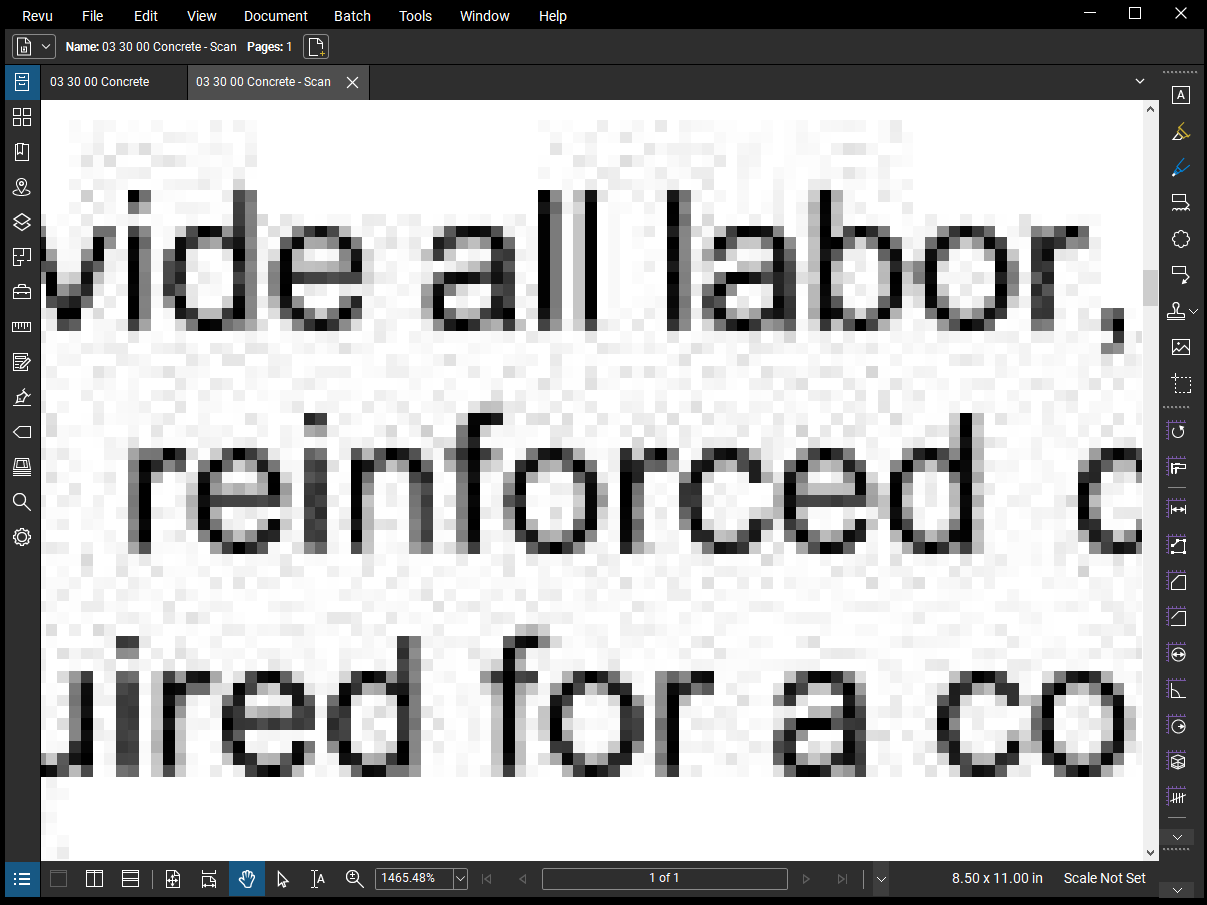 If the text stays clear, you’re working with true PDF text data. Text data can be read by PDF readers, such as Revu, and allow you to perform text edits as needed. 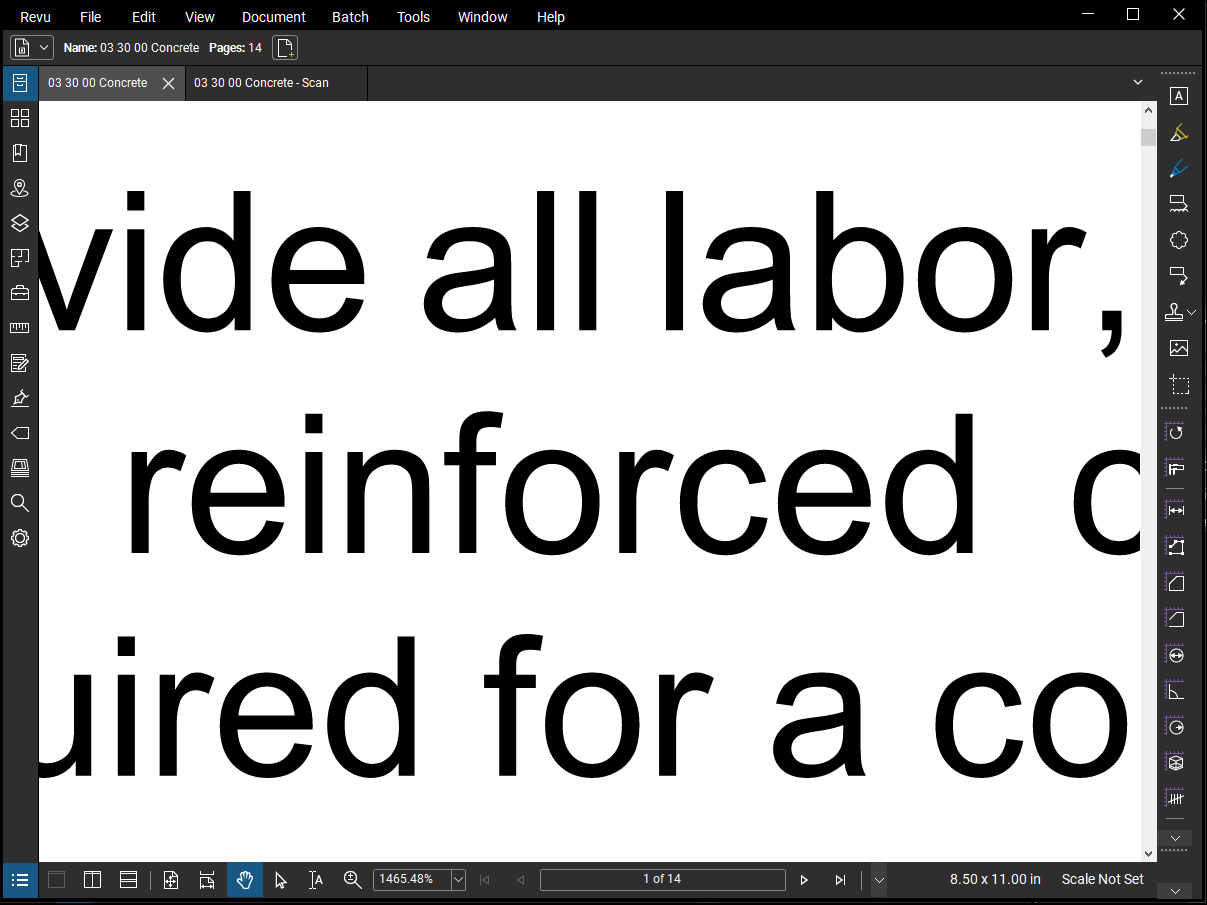 With text, there is one more way to check whether it is true text data or scanned characters: selecting it. In Bluebeam Revu, only true text data will be able to be selected. In order to try and select PDF text, select the Select Text tool at the bottom of the screen. 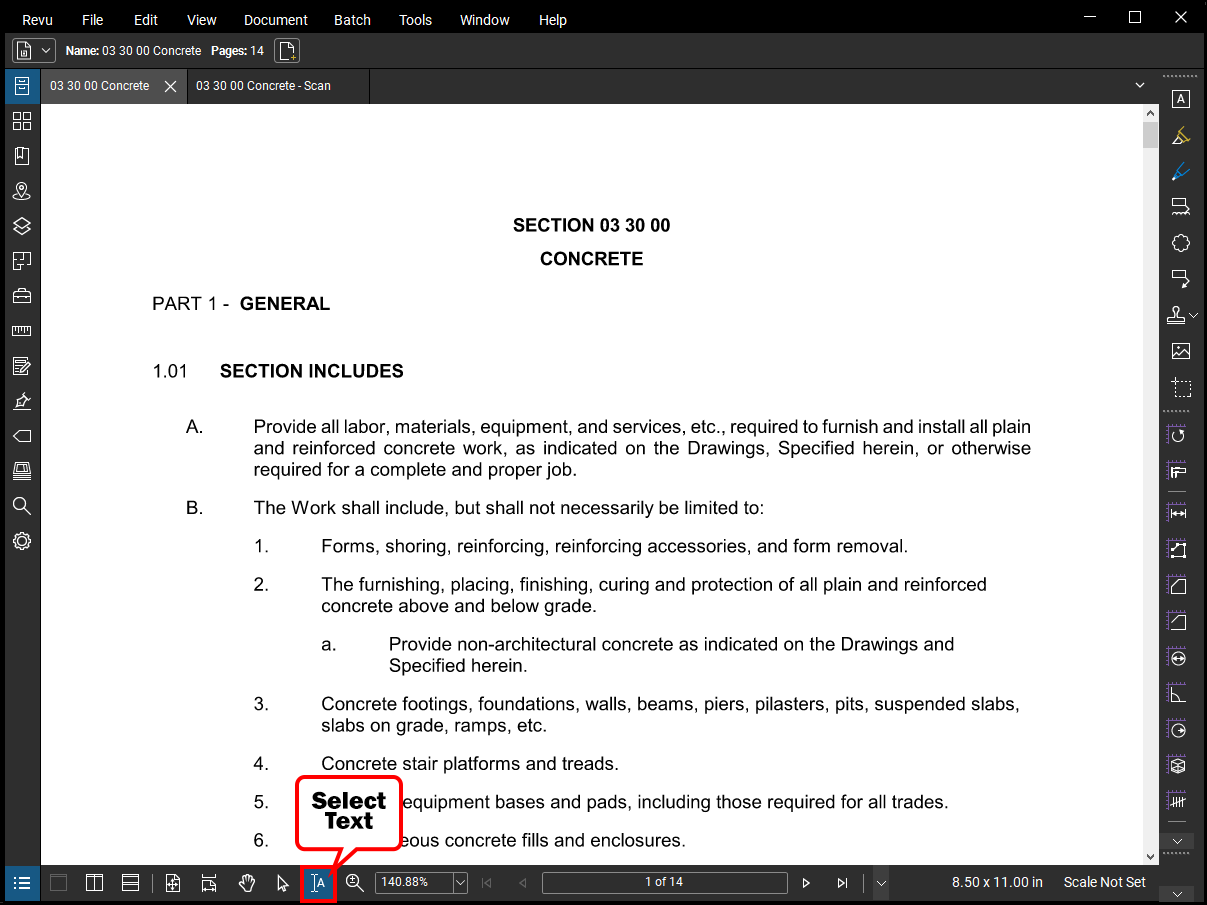 Click and drag the cursor over the text. If the text is selected, that is true text data, and Revu will be able to work with that data for searches and text edits. 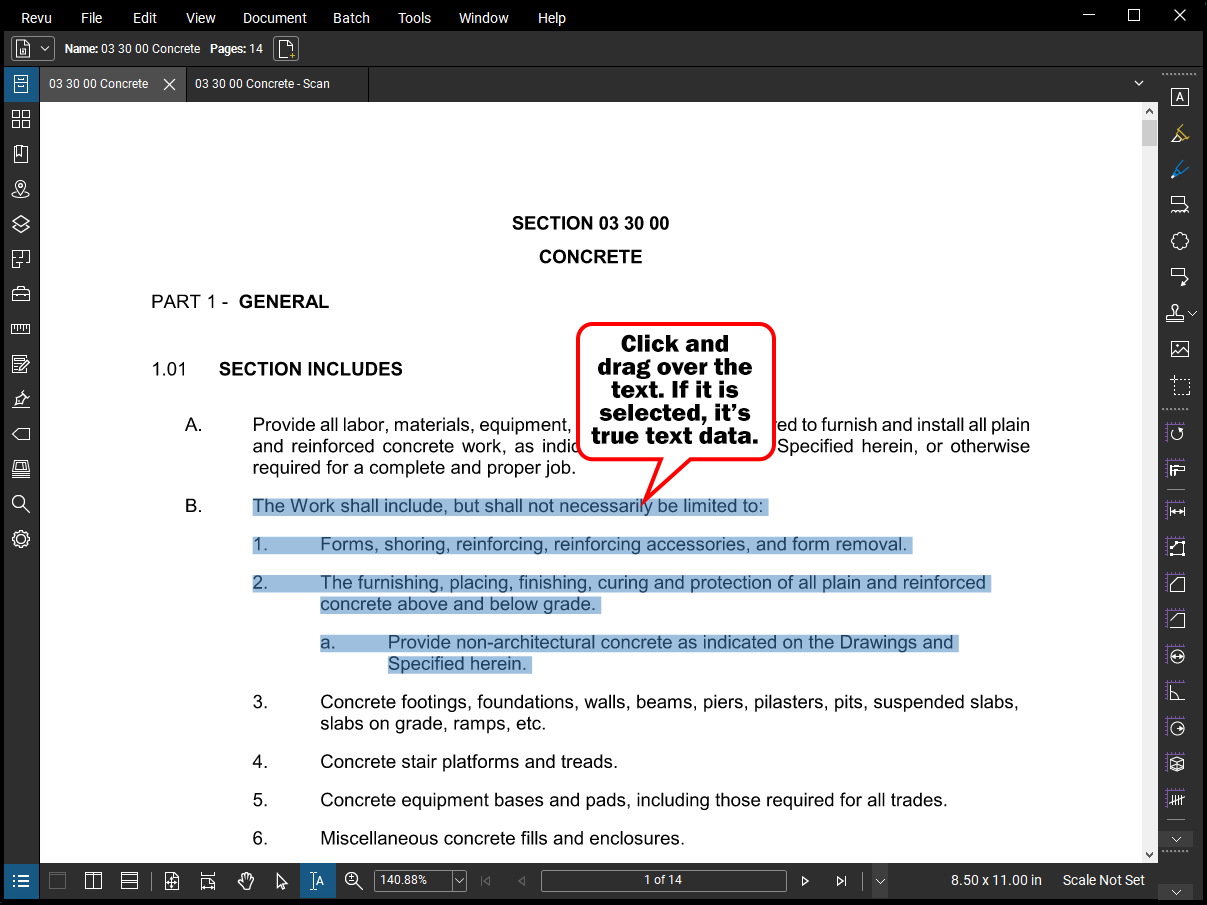 If the text is not selected, it is simply scanned text, and Revu will not be able to easily work with it until you run Optical Character Recognition on it. 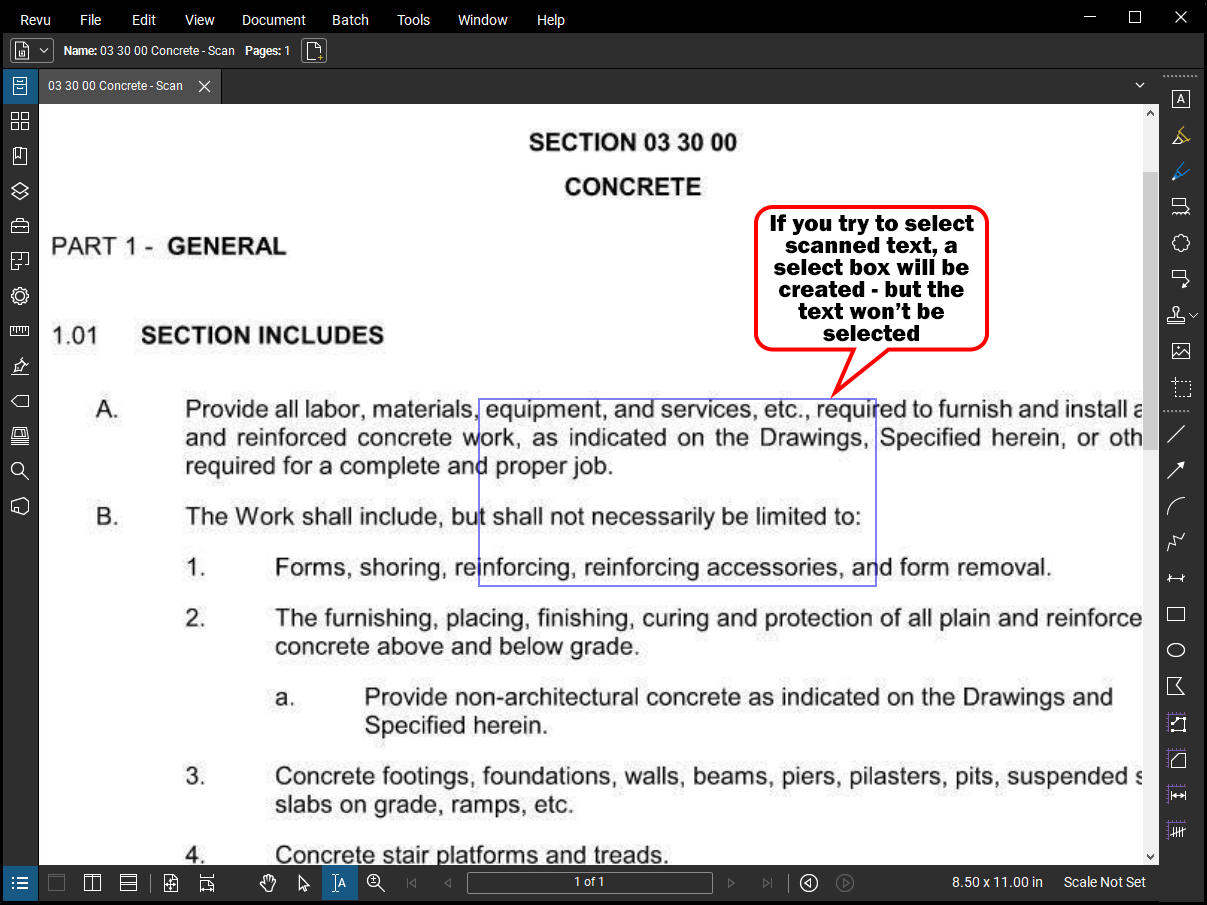 As mentioned earlier, you should always use vector PDFs when using Bluebeam Revu if possible. Although all types of PDF data can be used within Revu, there are several tools that are only available for use when using vector data, including:

Enabling the Snap to Content tool will cause markups to automatically “snap” to the underlying PDF content. This can help aid in placing both measurements and markups, as they will automatically fit to the content you’re placing it on. 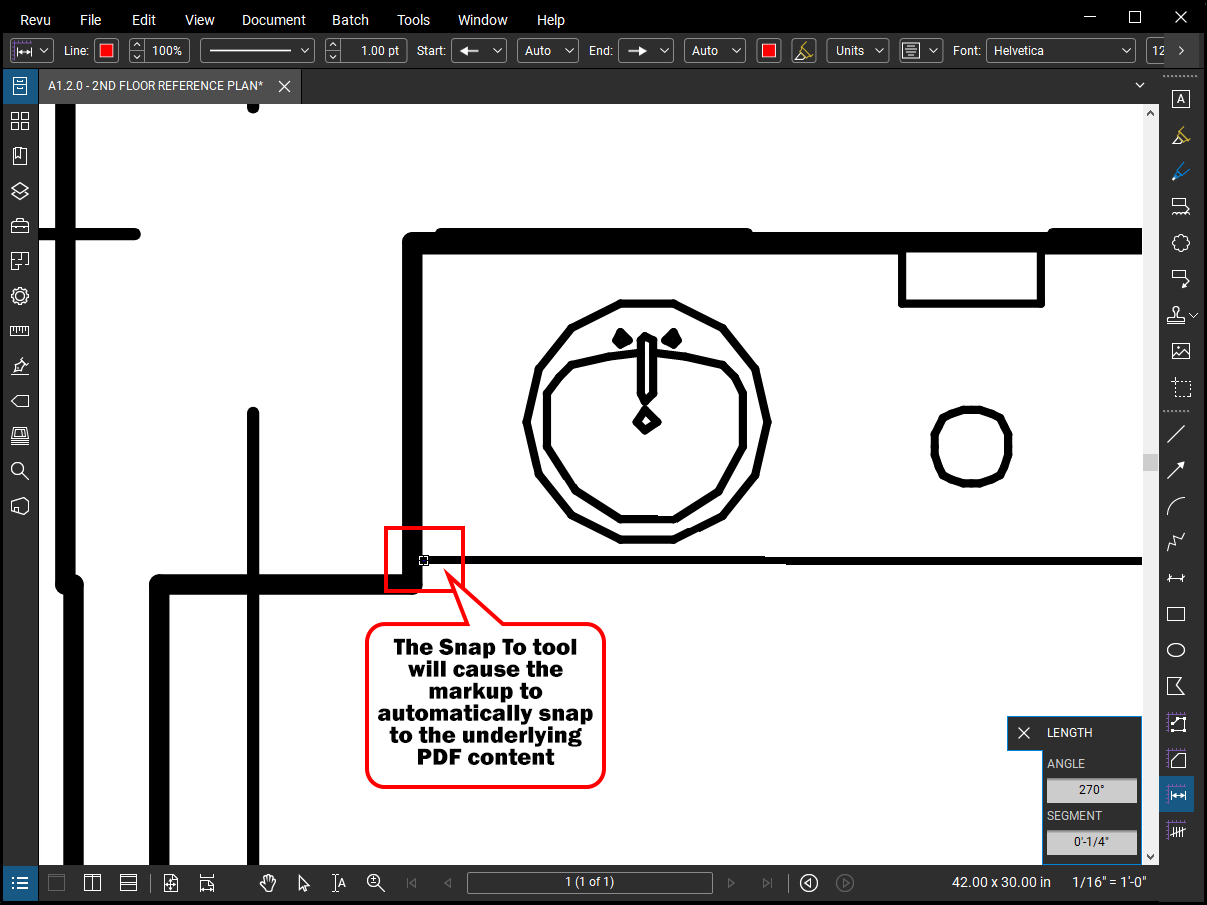 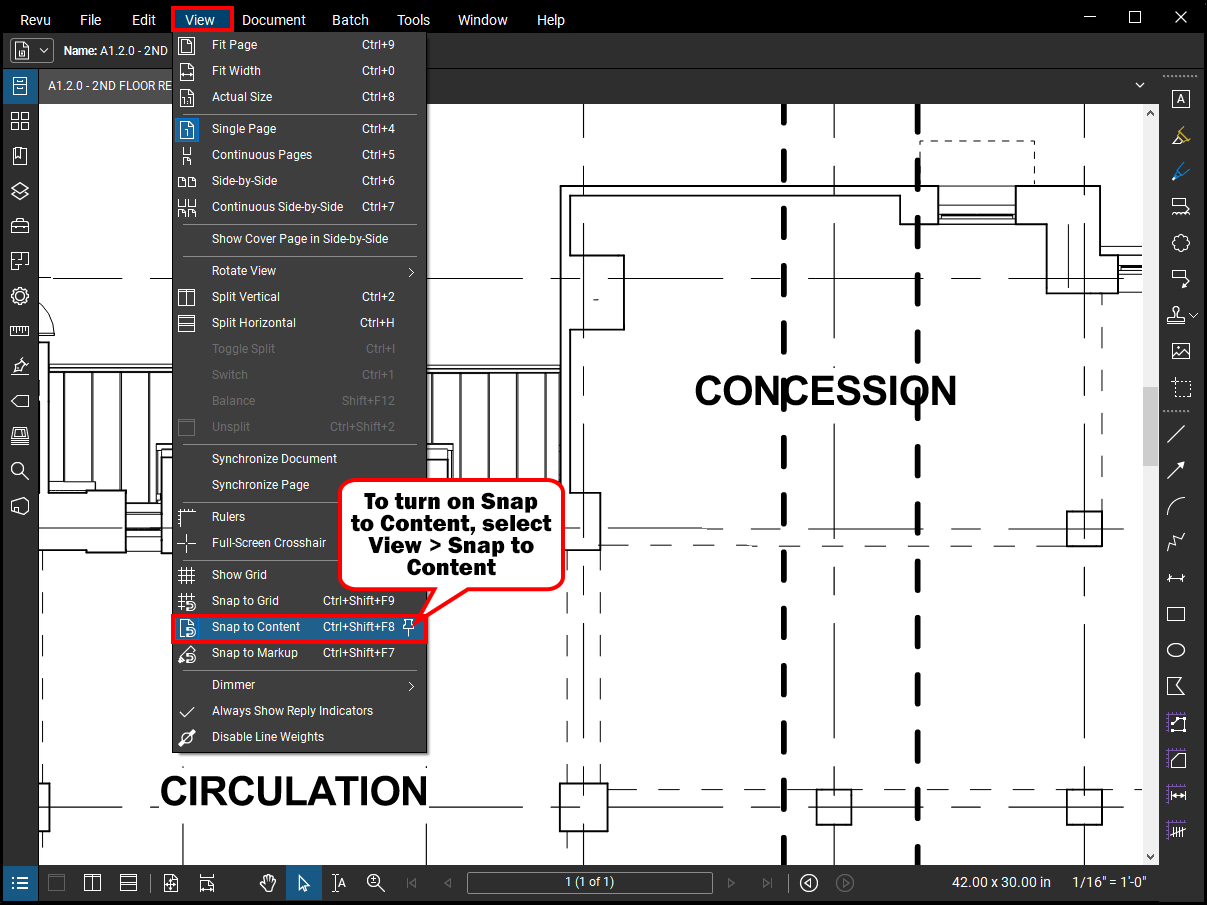 Both of Revu’s Search functions, both Visual and Text, can only be performed on vector and text data. To access the Search tools, select the Search panel. From the top of the panel, you can switch between Visual Search and Text Search. 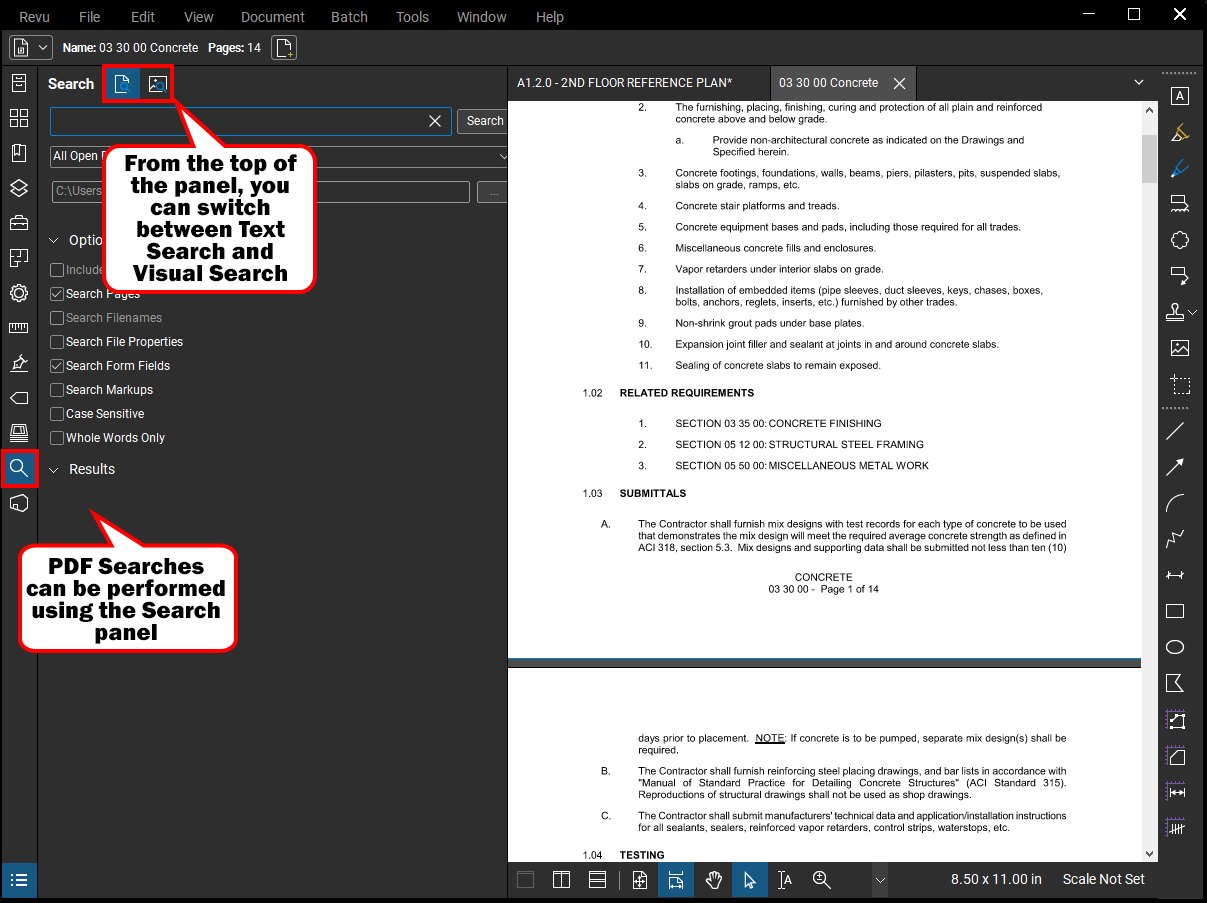 Bluebeam Revu’s Visual Search allows you to search for visual elements within the PDF. This tool can technically work with raster PDFs if the document is high resolution – but it is much easier with vector data. To take a visual search, you will want to zoom in closely to the item you want to search for – and with vector data, the image will stay clear even when zoomed in. Select the Get Rectangle tool and click and drag over the item you’d like to search for, and select Search. The application will search through all of the vector images on the page and provide you with a list of matching items. 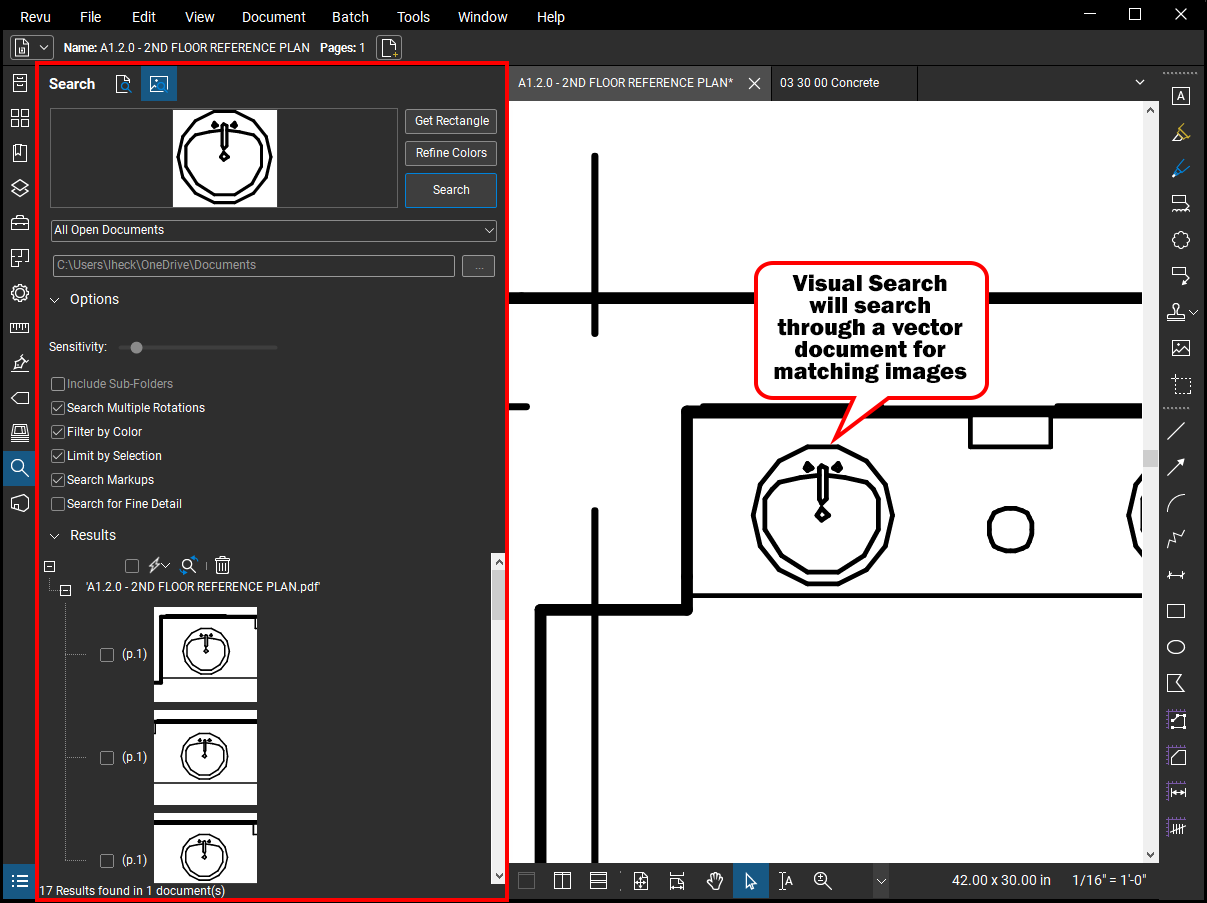 Similarly, the Text Search feature can only be used on PDF text content, as the program will be searching through all of the text to find matching results. When working with raster data, Revu won’t be able to identify what the text characters are, as they will simply display as pixels. With vector data, we can choose any search term and immediately receive a list of all instances of that term within the document. 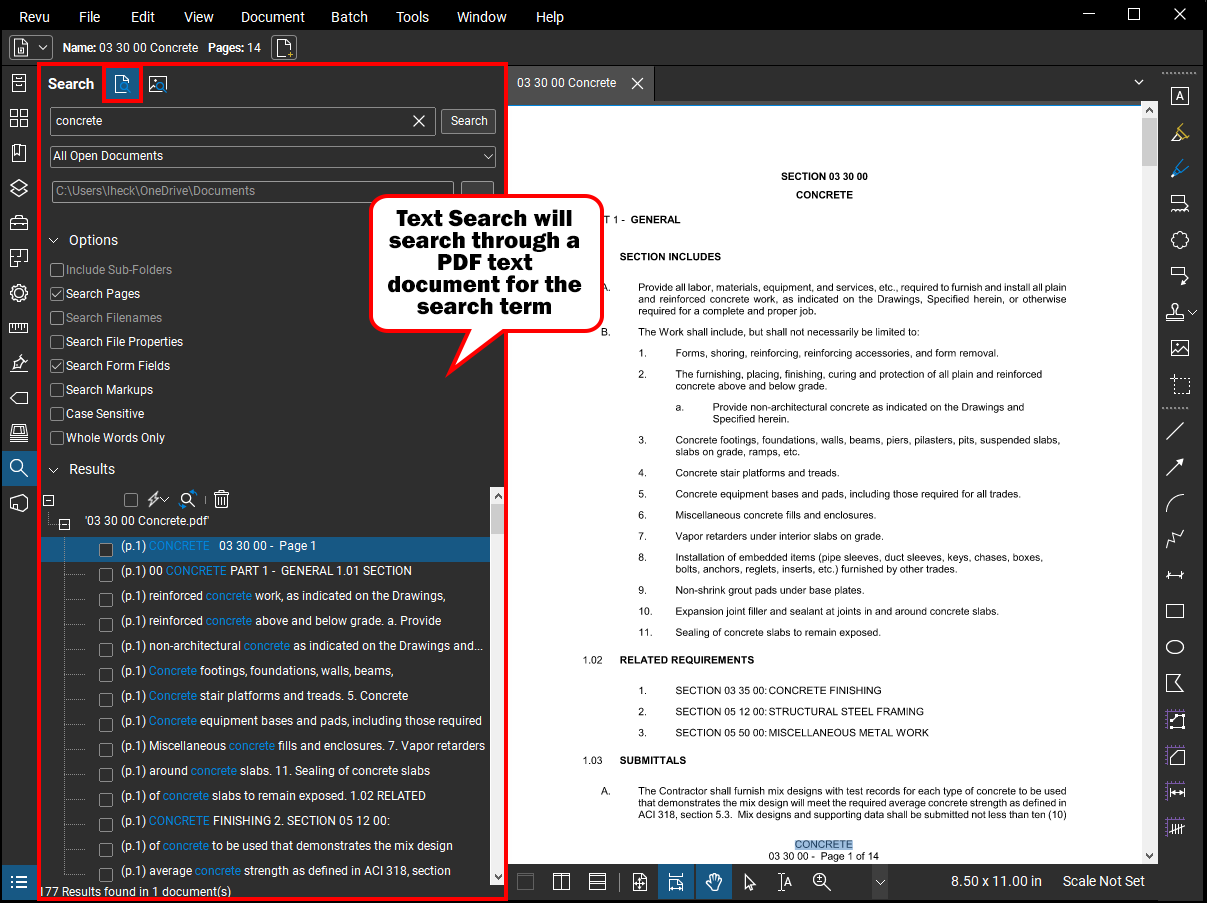 Bluebeam Revu’s PDF editing tools allow you to make basic edits to PDF text and content – such as editing text, cutting, and erasing content. Most of these tools can be used with both vector and raster documents – with the exception of Edit Text. The Edit Text tool will only work with true PDF text, as Revu needs to understand what text is already on the page to allow you to edit it further. 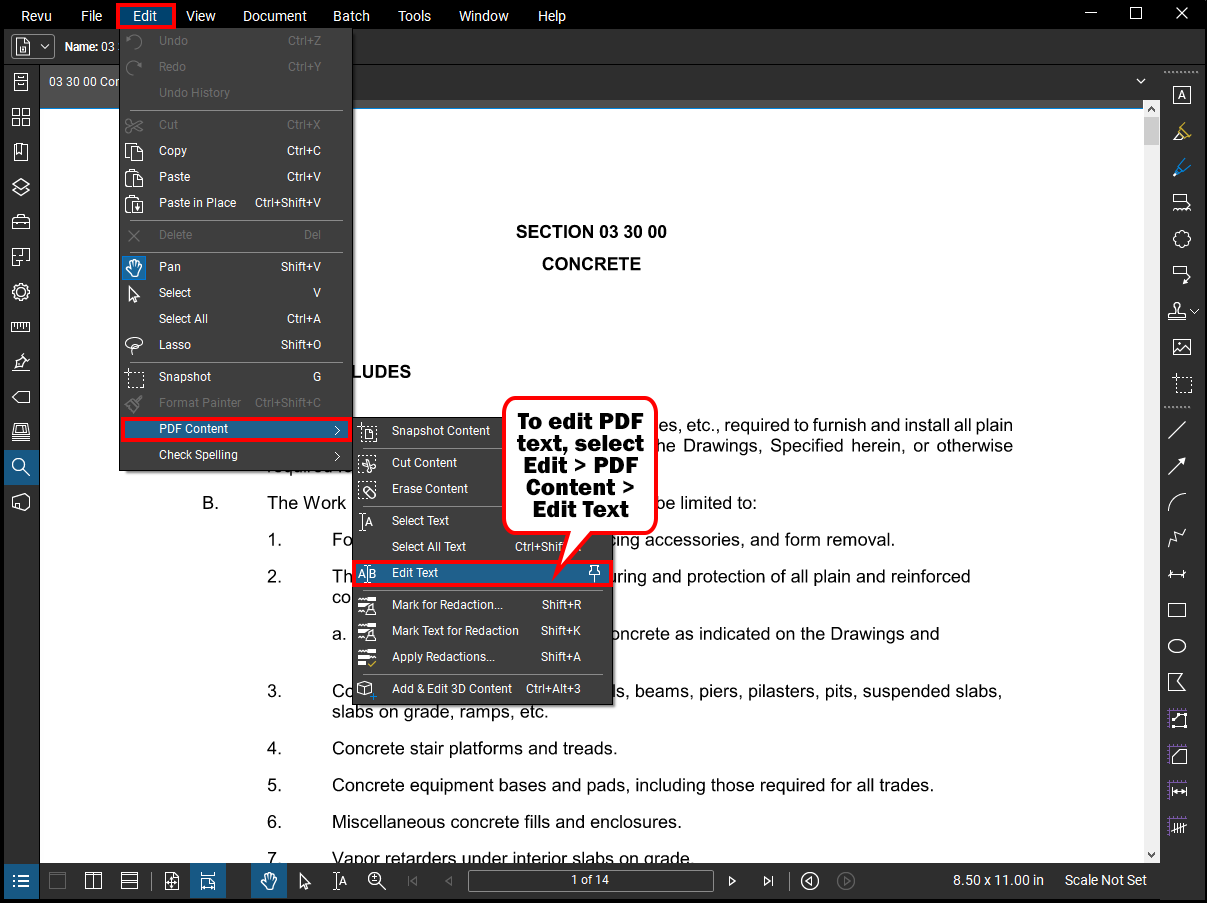 With the tool selected, you can now select the text on the page and edit it as needed. 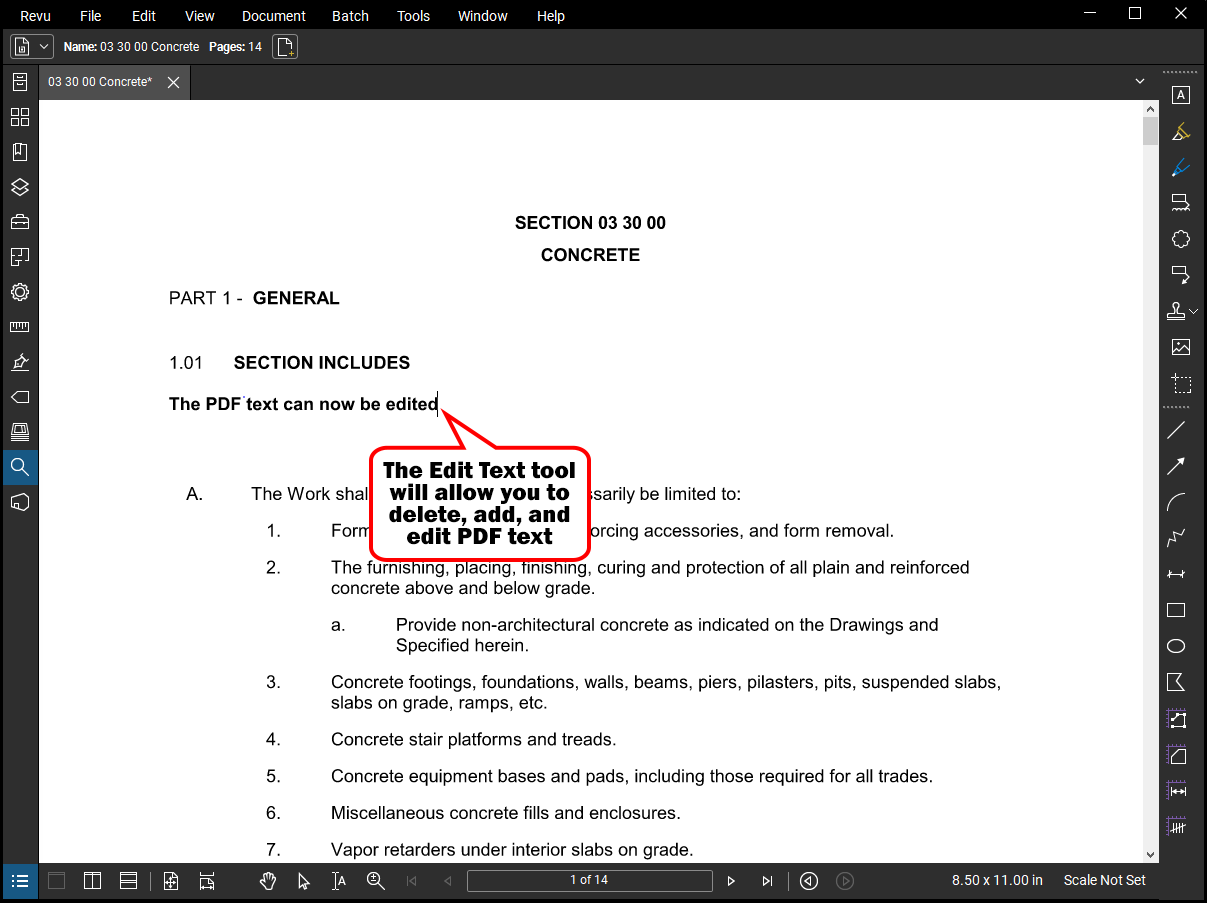 Bluebeam Revu eXtreme features an Auto Create From tool, which allows you to automatically add form fields to a vector PDF. 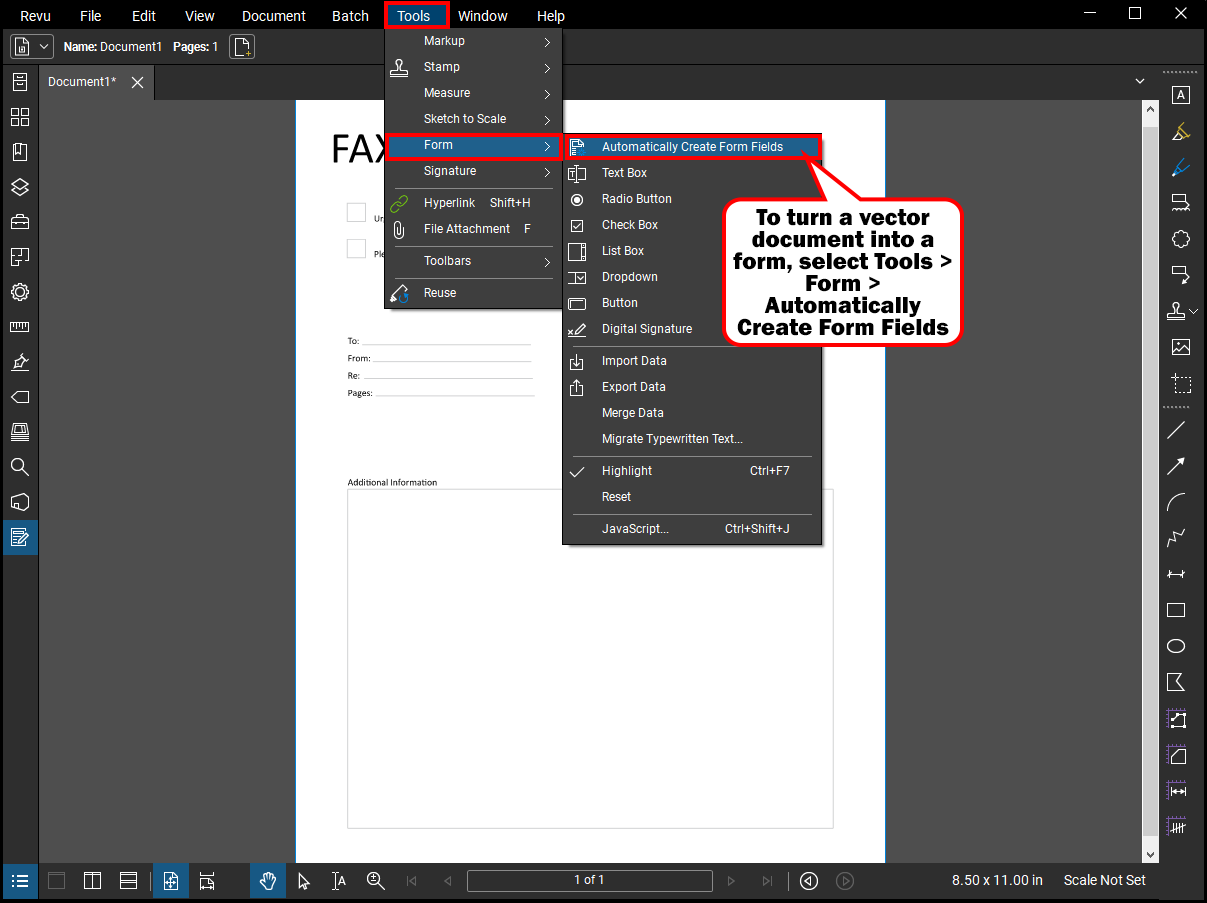 This tool works by scanning the content layer of the PDF to detect form elements (such as text fields, signature fields, or check boxes). Once identified, Revu will automatically transform the form elements into form fields. 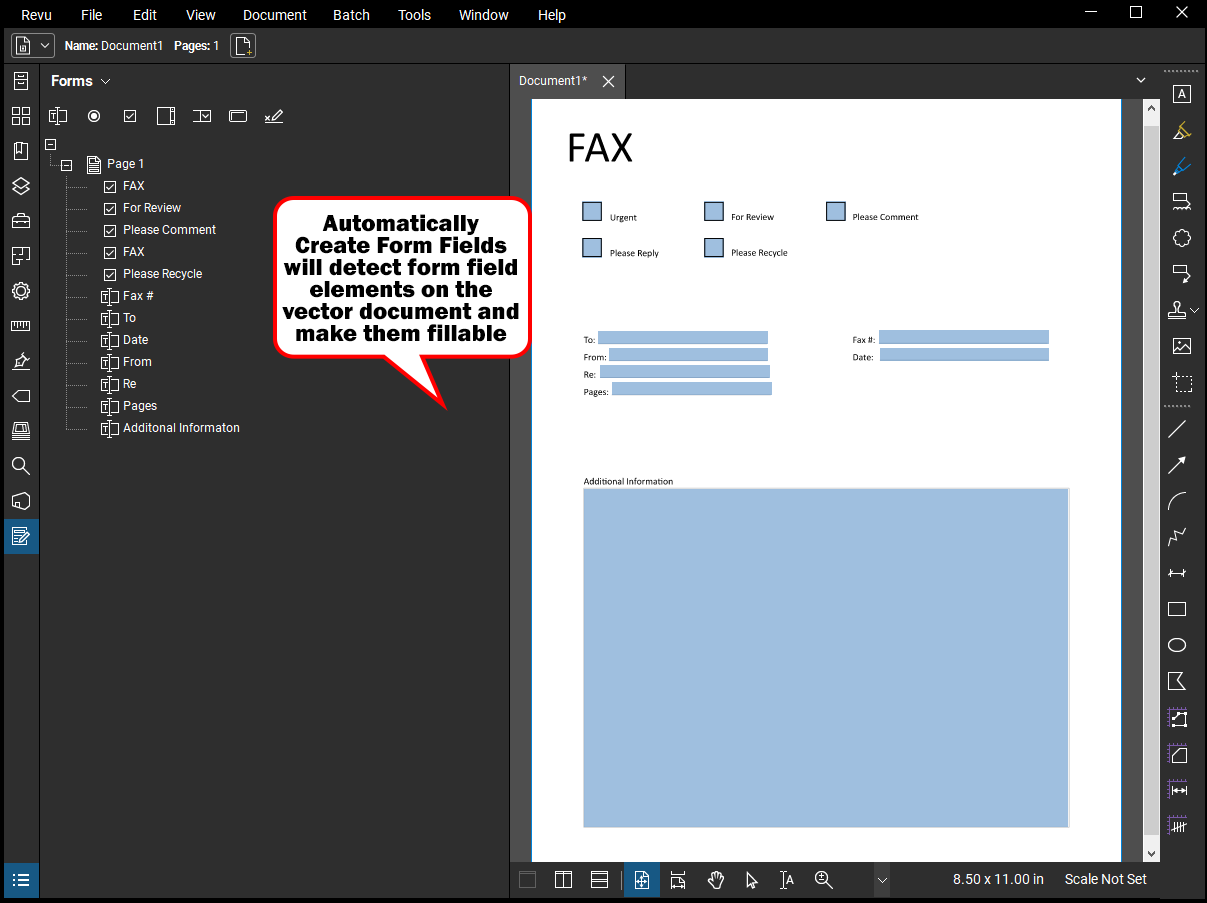 Because this tool utilizes an understanding of the content layer through identifying which PDF elements conform to form field elements, it can not be used with scanned, raster documents.

Although most Bluebeam Revu tools work with both vector and raster PDFs, there are a few tools within the program that can only be performed on scanned documents.

Bluebeam Revu eXtreme’s Optical Character Recognition (OCR) tool allows you to convert scanned text characters into true PDF text. As mentioned prior, scanned text PDFs can not be used with the PDF editing tools, Search functions, or form field creation, as Revu will simply view this text as pixels. 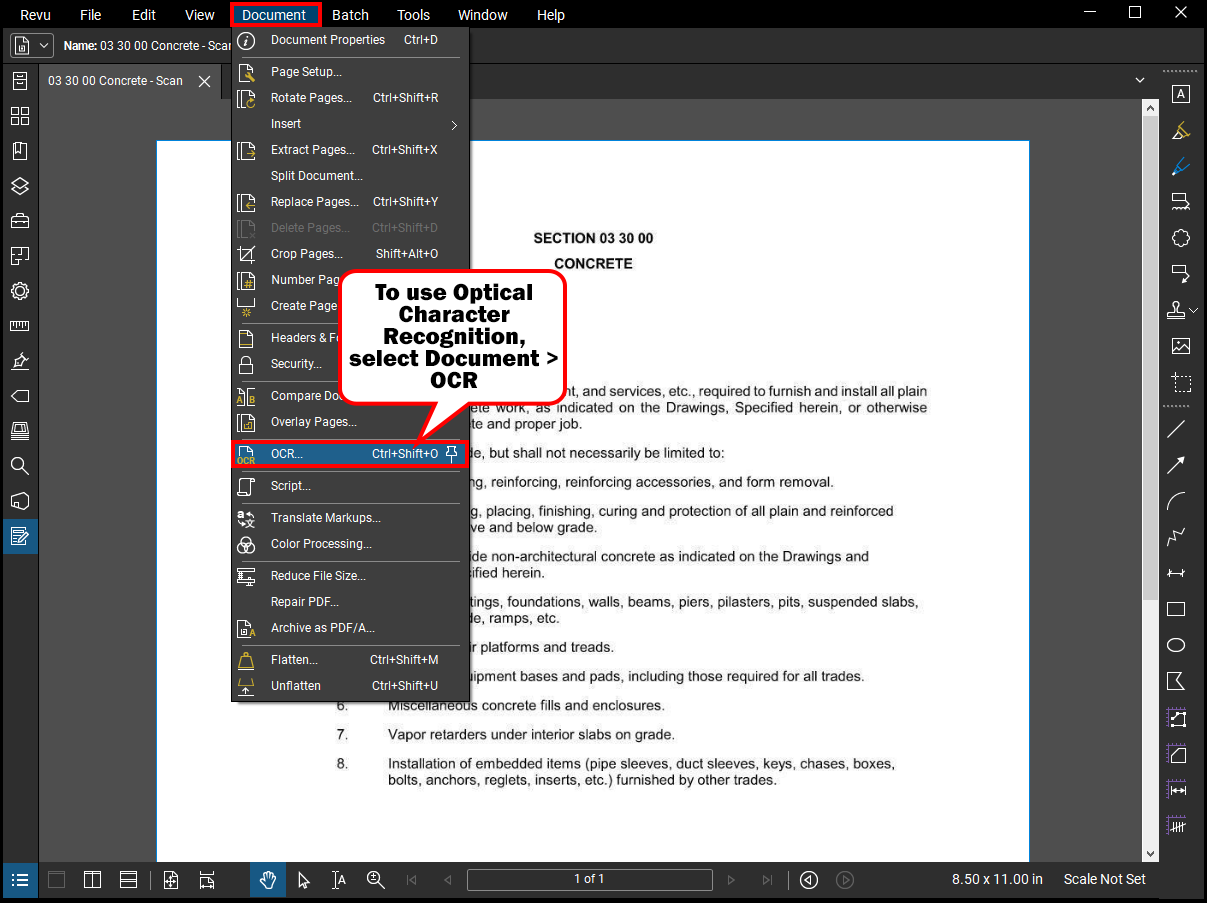 Once OCR is performed, the text will be seen as true PDF text, and can be used to perform text edits and text searches as needed. 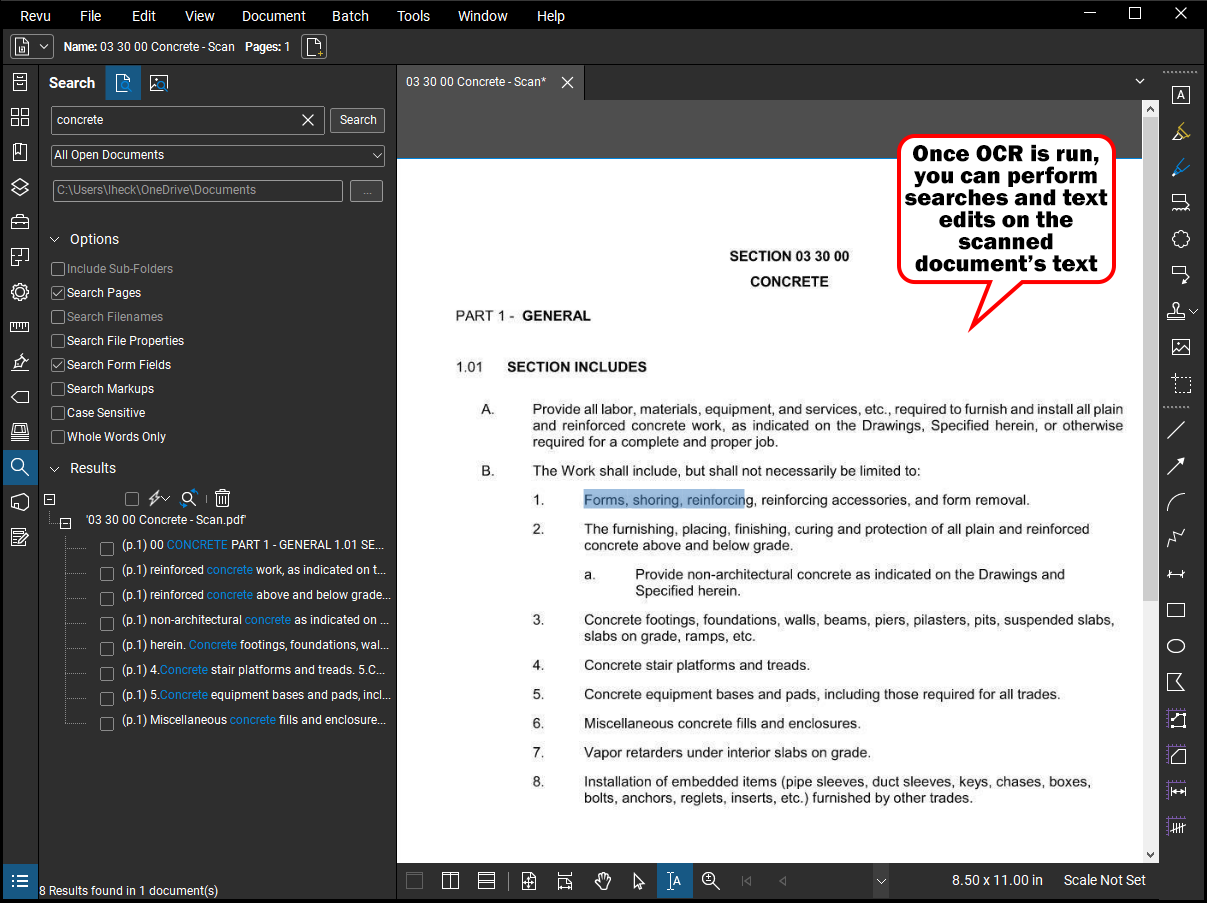 Revu’s Reduce File Size tool can help to minimize a PDF’s document size, making it easier to share and store via email or document management systems. The tool works by compressing bitmap images, which will only be on scanned, raster documents. Because vector documents utilize vectors rather than bitmap images, this tool cannot be used with them. 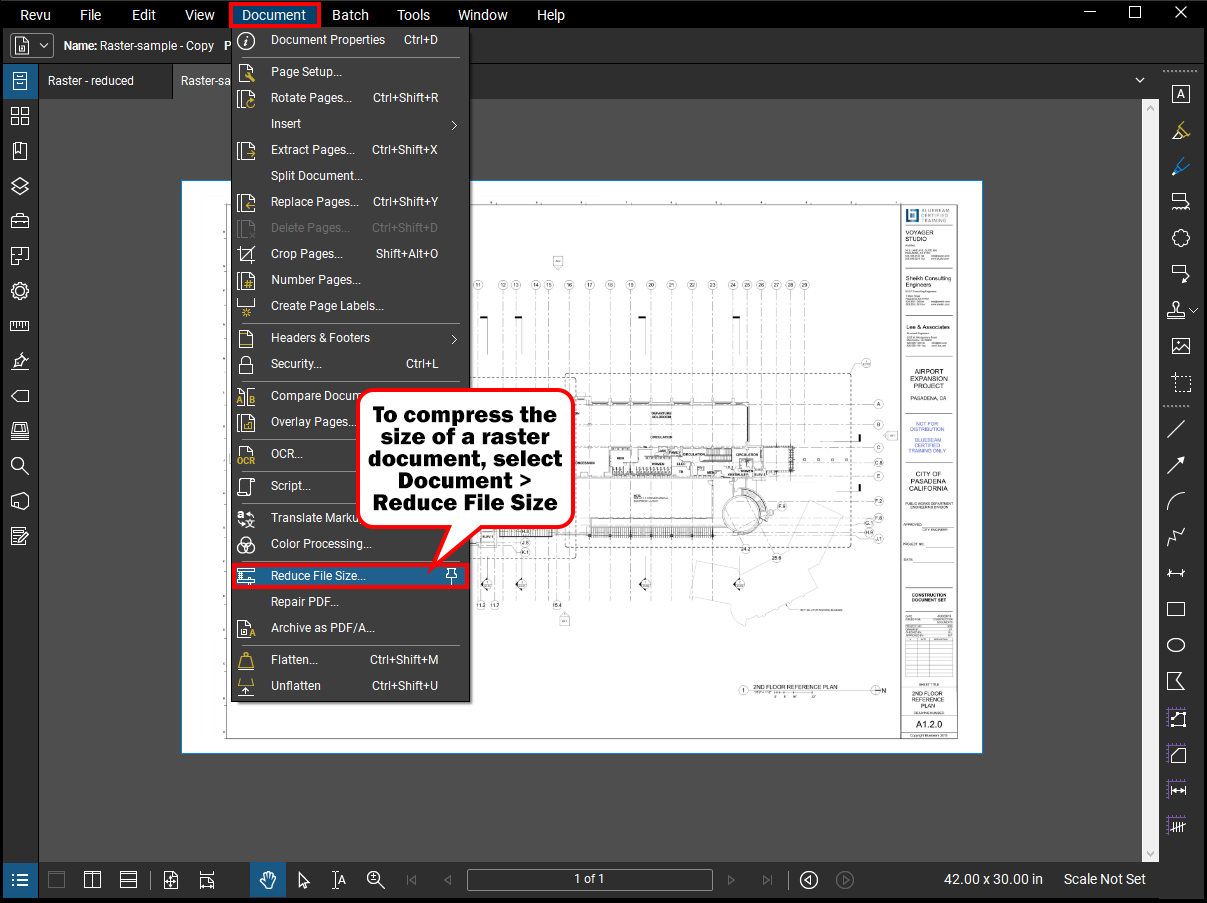 PDFs are encoded with different types of data, depending on how they are created. Raster PDFs are scanned documents, while vector PDFs are computer-generated documents. Bluebeam Revu can work with both types of data, but certain tools can only be used with a certain type of PDF data. If possible, you should always try to use vector data, as it will allow you to be more precise in placing measurements and markups, run searches, and perform text edits. However, if you do have to use a scanned raster document, Revu features tools specifically to aid in this process – such as OCR, which will convert scanned text into PDF text data.

If you have any comments, questions or suggestions, please use the comment section on the bottom of this page, and don’t forget to subscribe to our blog to get more Bluebeam tips & tricks directly in your inbox!

← Object Types Available in Oracle Primavera Cloud How Much Does Primavera P6 Cost? →