In project management, there is often a need to quickly seek out the differences between two separate project versions. This is especially important when working with various projects, baselines, and project reflections simultaneously. In older versions of Primavera P6, there was a Claim Digger function that allowed you to compare different schedules, or versions of the same schedule, over time. These comparisons would be generated as a report that allowed you to quickly analyze activity, resource, and unit additions and deletions along with date variances between two projects.

The Claim Digger tool allowed you to run a schedule comparison on a project and its baseline to view the differences in activity durations and dates. The tool could also be useful to compare two different projects if, for example, you were using the same resources on both projects – with the comparison report, you would be able to see the usage of these resources in both projects simultaneously.

With the release of Primavera P6 R8.3, the Claim Digger function has transformed into the Schedule Comparison function, which is now available from the P6 Visualizer. Although accessed differently and with a slightly different control center, the Schedule Comparison tool works essentially the same as Claim Digger did by providing reports of the differences between two separate project files.

This article will outline the process of using the Schedule Comparison tool in the P6 Visualizer, which can be accessed directly from within Primavera P6 Professional. 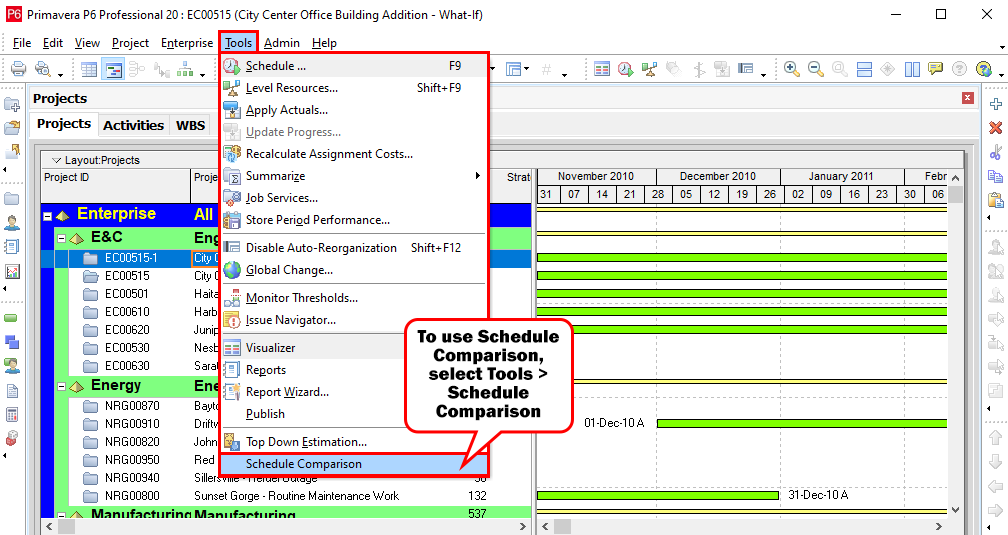 Within the Visualizer, the Create or Open Schedule Comparison box will display. 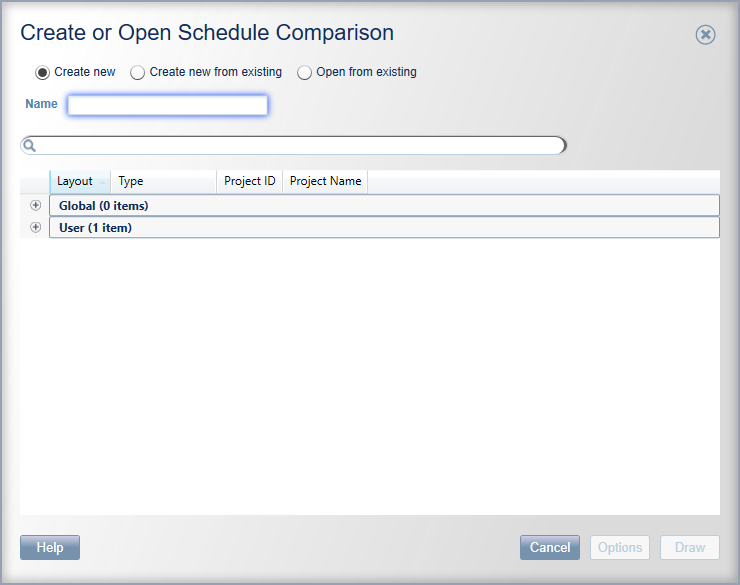 First, you can choose to create a new comparison, create a comparison based on an existing one, or simply open a prior comparison. If you haven’t created a comparison yet, you will only have the option to Create New. If you did have previous comparisons made, you could select one of the other options, and the comparisons would appear in either the User or Global category in the box below – depending on how you had saved it.

In this example, I’ll be creating a new comparison, so I’ll keep Create New selected.

In this same box, you will want to give your comparison a name by using the Name field.

Then, you’ll select the Options button from the bottom of the window. 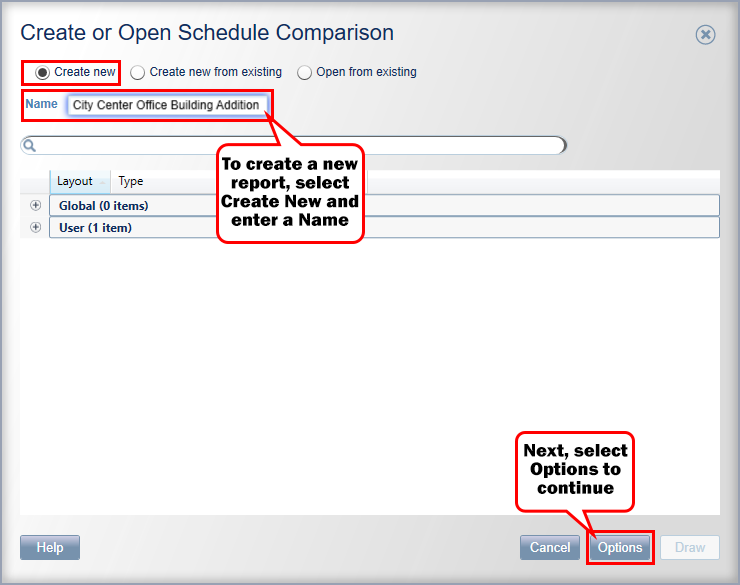 Here, you can choose two projects from your database to compare. You can compare any two separate projects, or a single project with any of its baselines.

On the left side, you’ll select the Revised project – this will generally be the updated version of the project. The Enterprise Project Structure will appear in the box below, and you will have to expand the EPS layers to find the desired project.

On the right side, you’ll do the same thing for the Original Project, which is generally an older version of the project. If you want to compare a project to a baseline, you can use the top dropdown to switch from Project to Baseline. 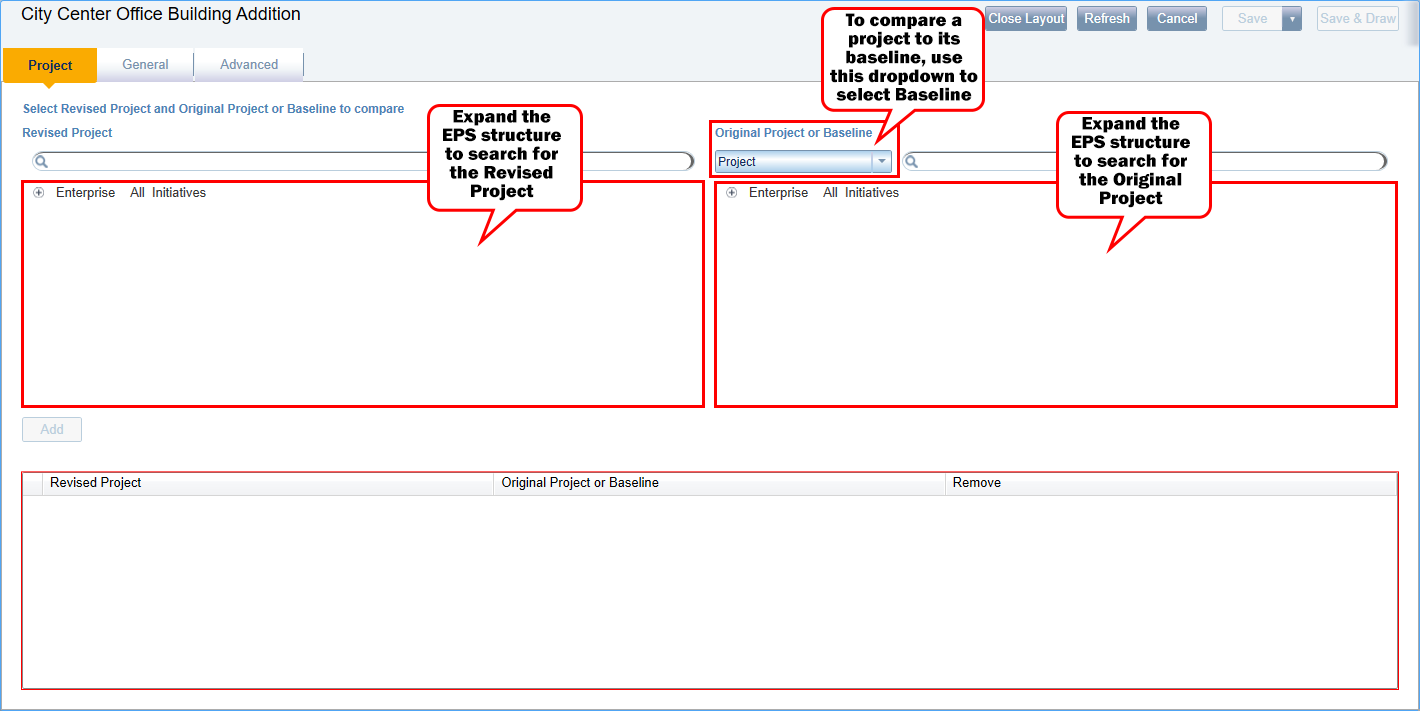 In this example, I’ll be comparing two versions of the same project. I am considering making some major scope changes to this project that involve adding additional activities and resources. Using this report, I’ll be able to compare the impact of these changes on the project’s duration and budget.

Once you have the projects selected, press the Add button. Both projects will appear in the bottom box. 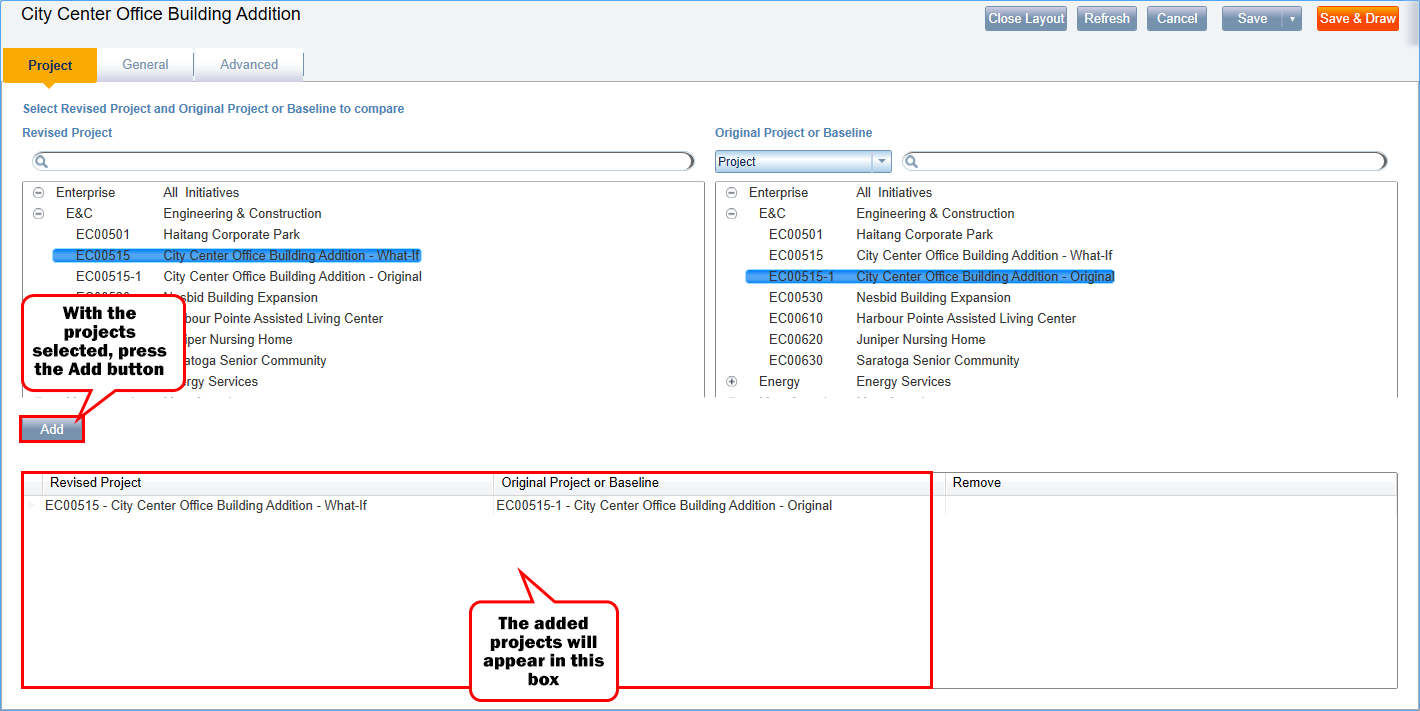 Before running the comparison, you can adjust the settings of the report. These are available from the General and Advanced tabs at the top of the screen.

In the General tab, you can choose how the report is grouped and saved. 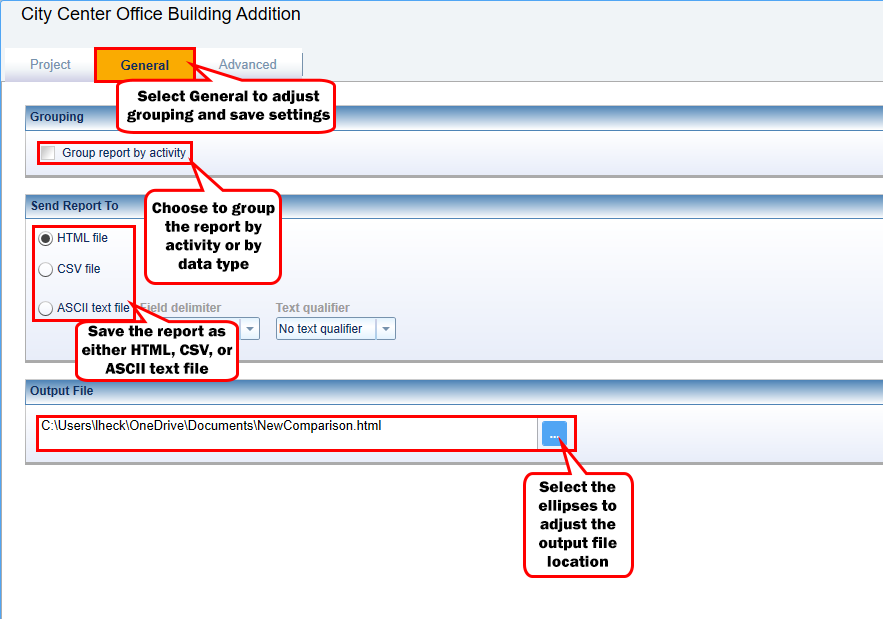 In the Advanced tab, you can choose which data to include in the report. There are lists of Project and Activity Information, and you can use the check boxes to choose which specific data types to compare.

For my projects, there are several data types I’m not using, such as Notebook Topics, Activity Steps, and User Defined Fields. To make my comparison report easier to comb through, I’ll deselect all of these items.

With all of your options set, you can choose to just Save the report, or Save and Draw it. Selecting Save and Draw will both save and open the comparison report simultaneously.

I’ll select Save and Draw to see the comparison report that has been created. 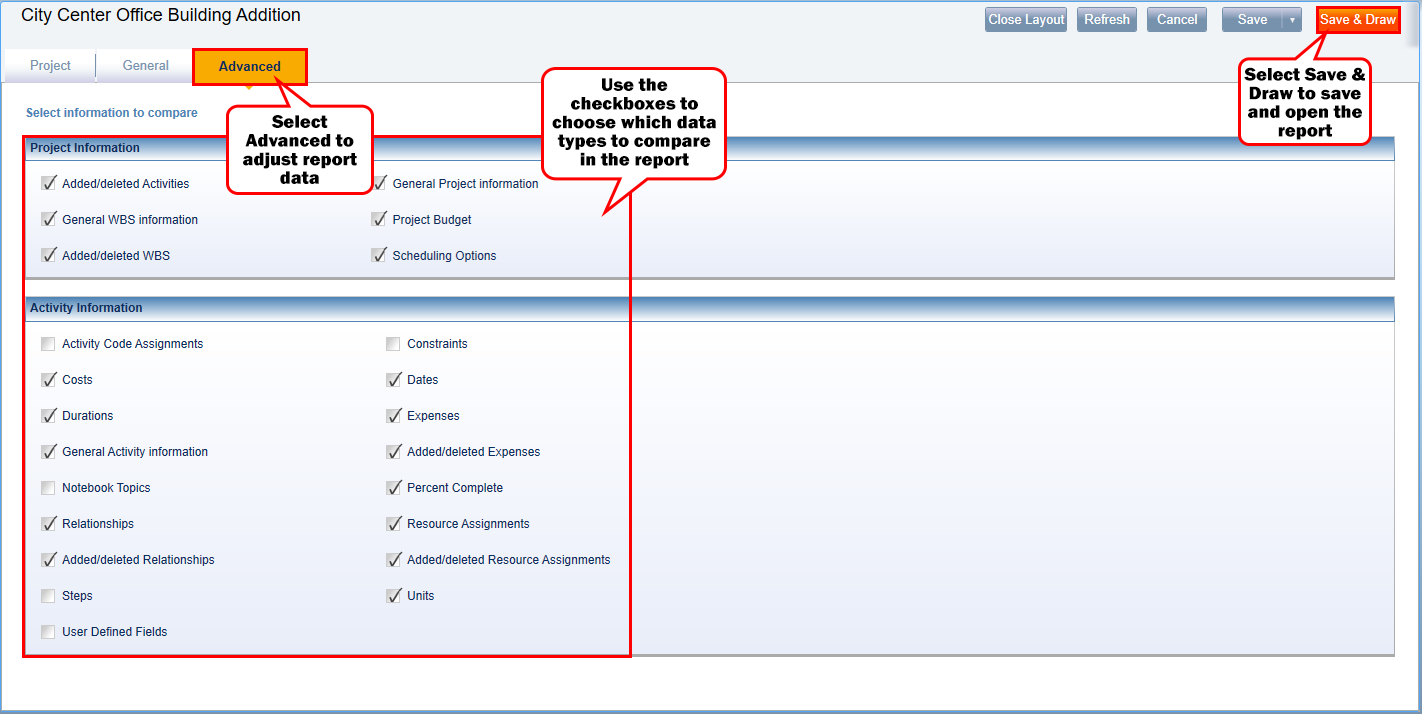 The schedule comparison report will open. This report divides each data type into different rows and will split rows by the original project’s data and the new project’s data. At the top of the report, you can quickly review dates, such as the data date, and start and finish dates for each project. Below, you can also see the original and new start and finish dates for each activity specifically, followed by Resource Assignments and Durations. Any field that was not found in one of the compared projects will be filled in with Value not specified in the database. 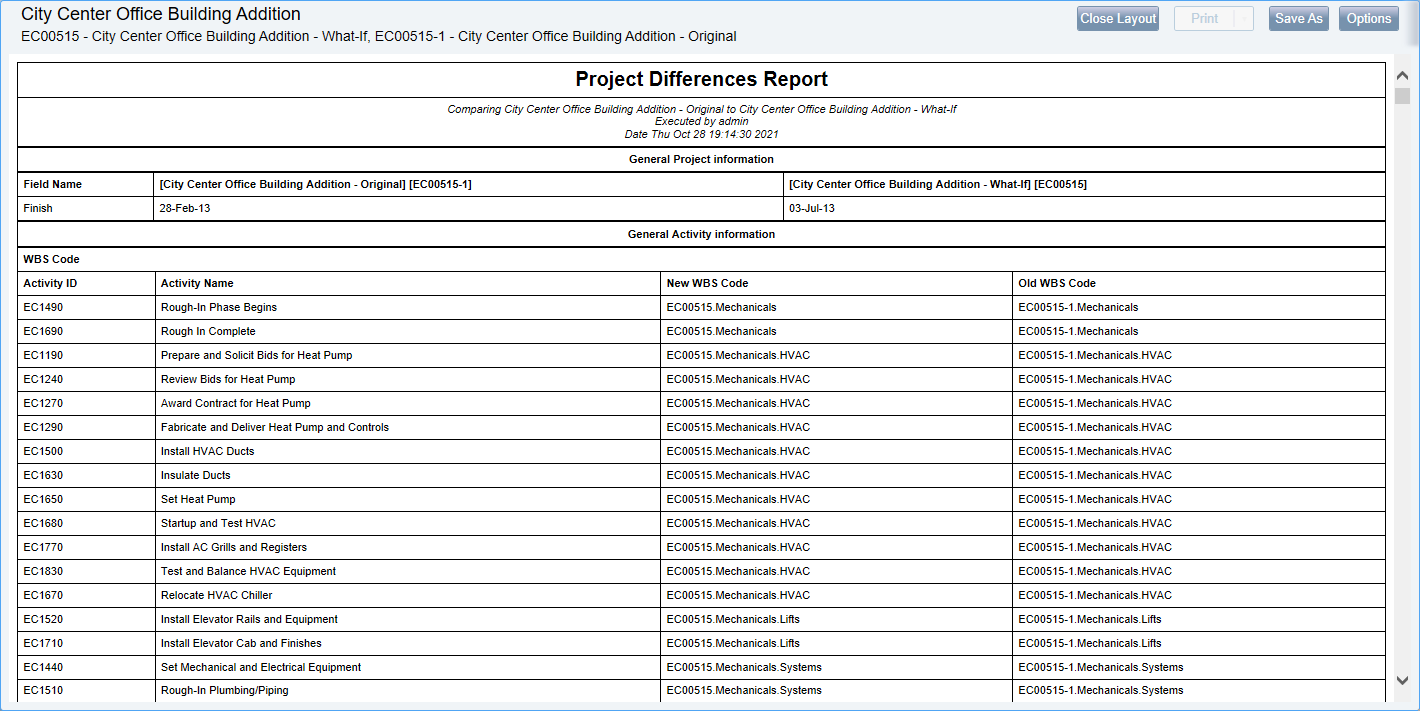 I can now use this report to analyze the changes in scope that have occurred between my original and my revised project versions.

At the top of the screen, you can choose to save this report or print it. There is a Save As button as well, but the comparison was actually saved to the User in the P6 Visualizer during its creation. If you need the report to be saved globally, you will want to press Save As. This will allow other users in your database to access the same report. 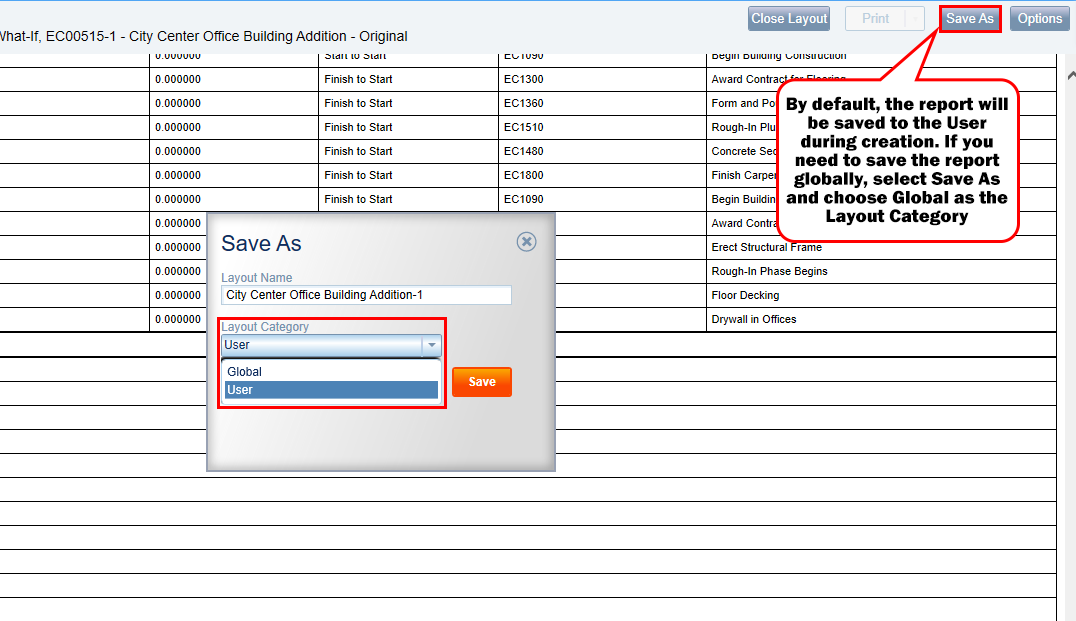 To exit out of the report, select Close Layout. 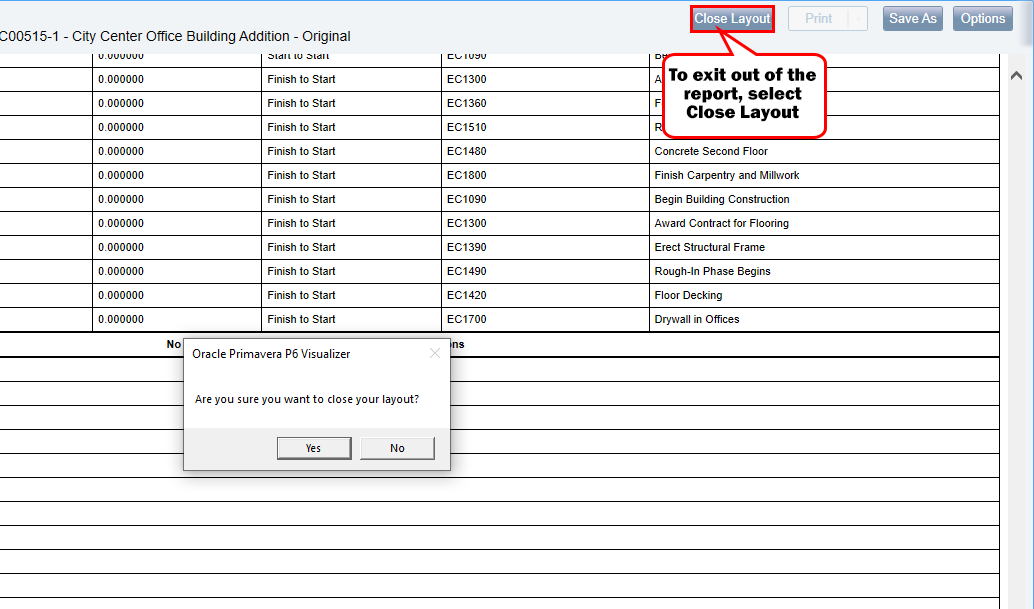 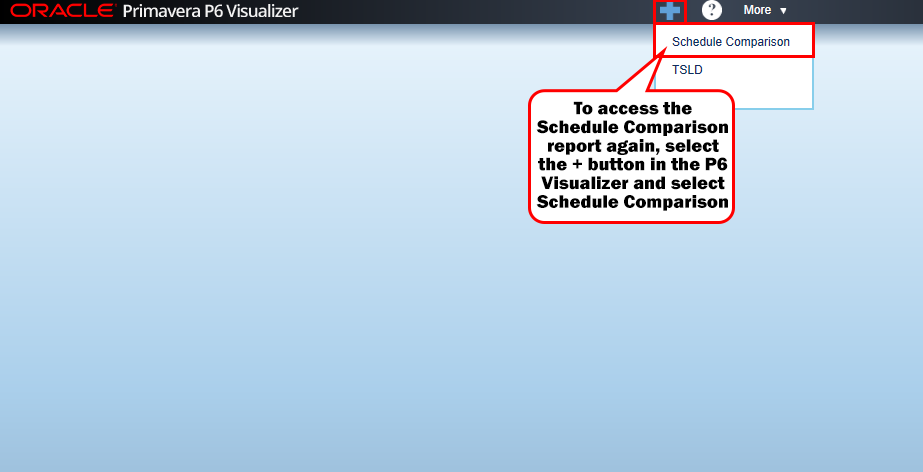 You can access the saved comparison report by selecting either Create new from existing, to create a new report from the same projects with different settings, or Open from existing to simply open up the previous comparison. From the User and Global categories, select the desired comparison and press Draw to reopen the report. 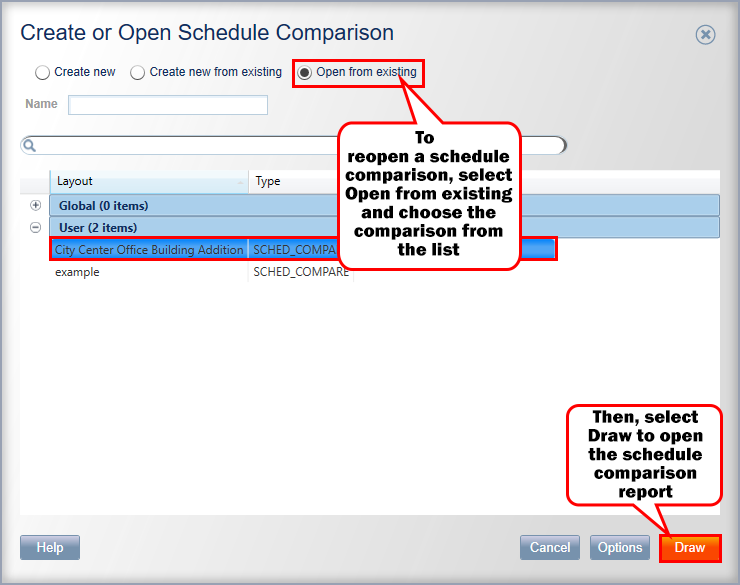 One limitation to Schedule Comparison that you should be aware of is that it will not tell you anything about project or activity calendars, so this information will have to be tracked individually if needed.

Lauren Hecker is a Primavera P6 Professional Instructor and teaches onsite and virtual Primavera P6 Fundamentals and Advanced courses. To see her next open enrollment course, please visit our calendar. To schedule an onsite or custom course, please contact us! 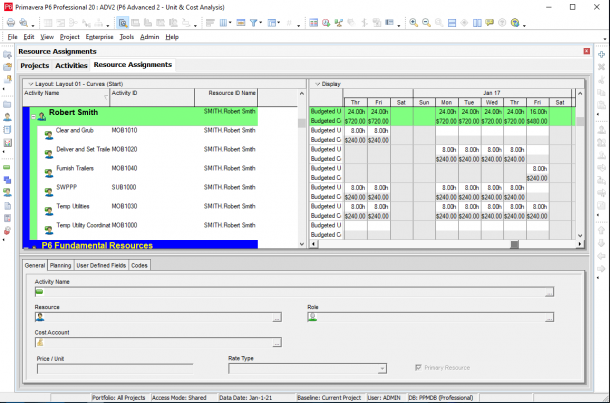