How to Use Activity Steps in Primavera P6

In Primavera P6, activity Steps allow the scheduler to break down an activity into smaller units of work. Instead of adding additional activities to the schedule, which increases its intricacy, the activity is left the same on the Gantt chart, but given more definition with the Steps function. The scheduler can add individual steps to activities, or add predefined groups of steps based on templates that have been defined for the organization.

Activity steps also make it possible to track work that cannot easily be sequenced. For example, let’s say you have an activity to form several columns in different locations, but only one column will be formed at a time due to the available resources. With just an activity named Form Columns, no one would know the order in which the servers have been installed or the progress of the installation. Using steps, we can break this activity down into the different column formations.

Setting Up the Project for Steps

In order to use steps, two conditions must first be met. First, we have to tell P6 that we are planning to use steps in this project. This is done in the Details section of the Projects screen, under the Calculations tab. 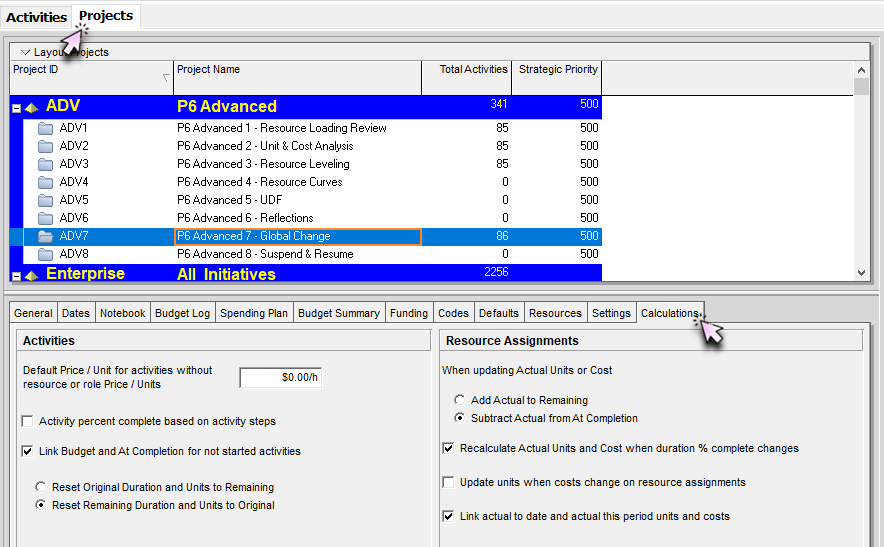 Under the Activities section, check the box for Activity Percent Complete Based on Activity Steps. This box is normally unchecked by default when a new project is added, so it’s very important to check this off right away if you plan to use steps. 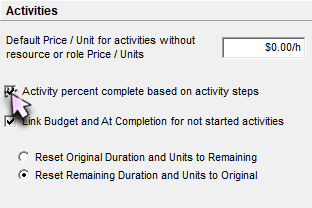 You’ll be prompted by a dialogue box that this selecting will recalculate edited physical percent complete values from steps. Press Yes to continue.

Second, we have to set the percent complete type for the activity to Physical. This is done in the Activities page, under the General tab in the Details section. 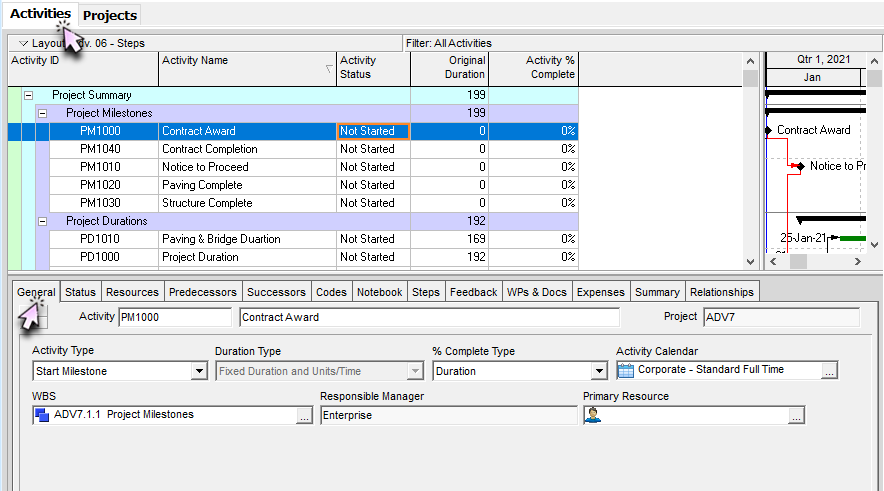 Under the % Complete Type field, select Physical. This will prepare the respective activity for progress tracking based on the steps that are completed.

Next, before adding activity steps, we first need to set up the layout for it. As steps will be assigned to activities, I’ll start on the Activities page. In the Details section, I’ll click on the Steps tab.

Currently there are only two columns displayed in the steps list. Before adding steps, I’ll add a few more columns to this section by right clicking on it and selecting Customize Steps Columns. 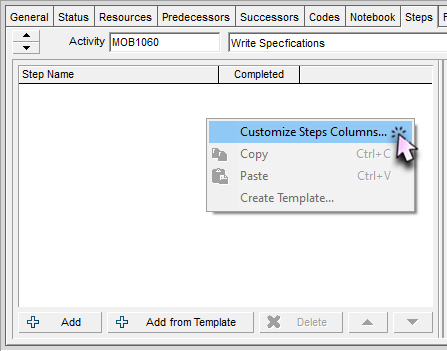 I’ll select the double arrow button to move all columns from Available Options to Selected Options. 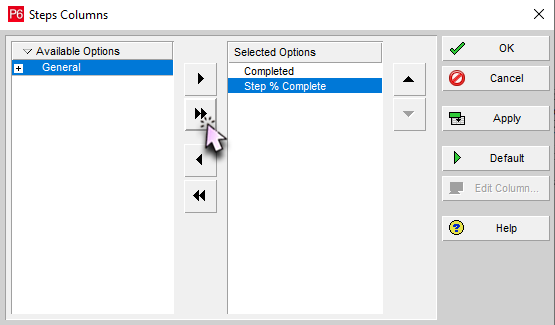 I now have columns for Step % Complete, Step Weight, Step Weight Percent displaying. It should be noted that additional columns can be added using User-Defined Fields, allowing you to include information such as the Finish Date, Start Date, and Cost of the Step. 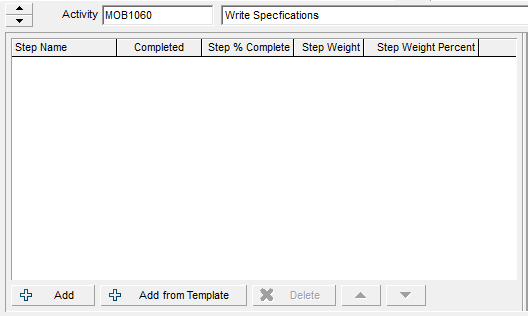 With the layout setup, I can now add Steps to my activities. As an example, I’ll select the Write Specifications activity within this project. From the Steps tab, select the Add button to add a step to the activity. 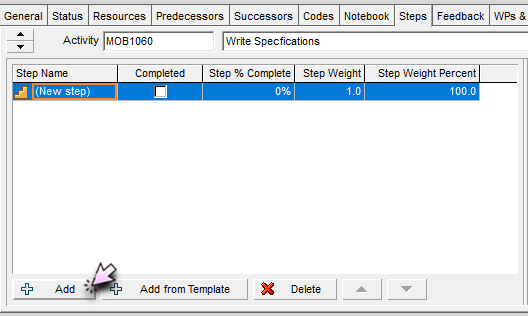 I’ll add 5 steps to this activity: 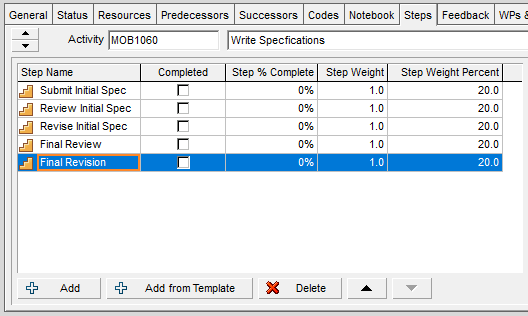 Next, in the Step Weight column, I’ll specify the step weight to distribute the percentage of each step in the activity accordingly. The Step Weight is a numerical value which indicates the portion of activity work that a single step represents. The higher the value you enter, the greater the importance of the step in the activity. Once work for a step is underway, Primavera can use the step weight and the reported progress of step work (Step Percent Complete) to calculate the percentage of total work that has been completed for the activity (Activity Percent Complete). I’ll add the following Step Weights to the steps: 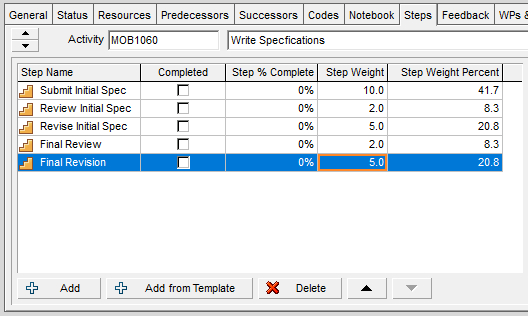 Now that steps have been added and step weights have been configured, these steps will help us as the project progresses. Let’s say that time has passed and it’s now time to perform a status update. With Write Specifications selected, I’ll use the Status column in the Details section to begin the status update. At this point in time, let’s say that this activity has started but is still in progress, so I’ll first check off the Started option.

Instead of adjusting the progress in the Status tab, I’ll switch back over to the Steps tab.

For this activity, we have so far submitted and reviewed the initial specifications, so I’ll check off the Completed box for both of these steps. 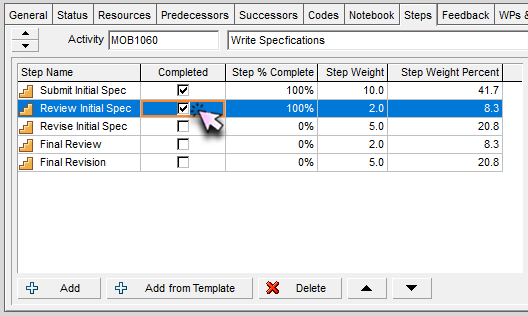 With the steps completed, the activity’s percent complete will change to reflect the step completed. It is possible to mark tasks as a percentage amount complete by entering the corresponding percent complete in the Step % Complete column. However, it is recommended to wait until the task is complete and then simply mark it as 100% complete by checking the Completed box.

From the Activity % Complete column, I can see that the Write Specifications activity is now 50% complete, due to the completion of its first two steps. As additional steps are completed, this percent will adjust automatically.

With Steps, we are able to split up our activities into smaller chunks of work. This helps to cut down on the intricacy of a large schedule and also allows for more activity definition. Additionally, steps can help track the progress of complex activities – instead of manually having to come up with the percent complete for the activity’s progression, Primavera P6 will calculate this for us based on the Steps that have been completed. 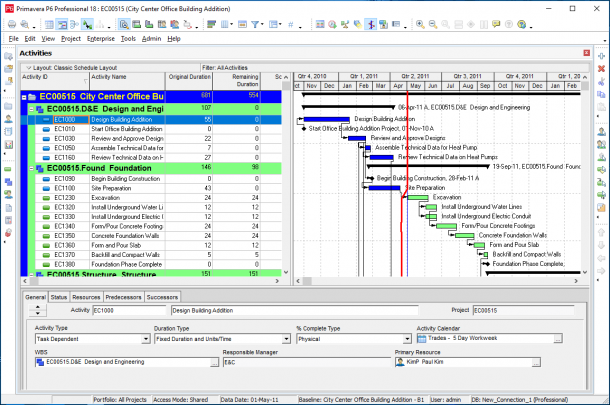